President Donald Trump has been widely criticized after investors in a luxury property development in India are being offered the chance to have “conversation and dinner” with his eldest son, Donald Jr.

Donald Trump Jr. is visiting India this week and will promote the Trump Towers development near Delhi.

Critics say the Trump family is cashing in on the president’s name.

However, Donald Trump Jr. has said he has been building relationships in India for years.

The full-page advertisement, which ran as the front cover of several Indian newspapers over the weekend, featured a picture of Donald Trump Jr. together with text: “Trump is here. Are you invited?” and “Trump has arrived. Have you?”

The 47-storey towers in Gurgaon, close to New Delhi, are being developed by the Trump Organization and local partners – with some apartments selling for more than $1 million.

The Trump Organization, formerly headed up by President Donald Trump, is an umbrella company for hundreds of investments in businesses including real estate. Donald Trump Jr. is now its executive director. 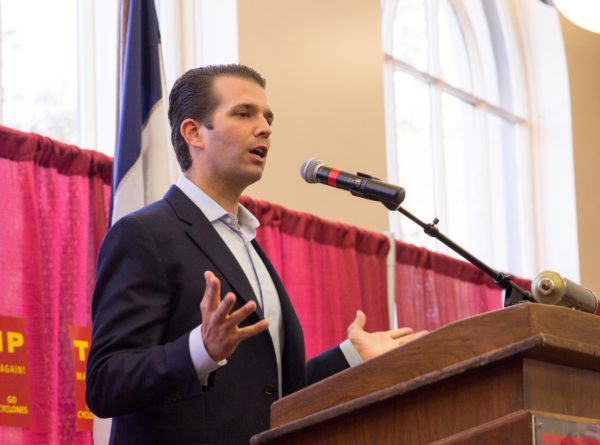 India is the Trump Organization’s biggest property market outside the US, and in 2016 the Trump family earned up to $3 million in royalties from ventures in India, according to a financial disclosure report.

The Citizens for Responsibility and Ethics in Washington (CREW) – a watchdog group – added the Indian promotion to a list of instances it believes show the Trump name being used for commercial gain.

In an interview last week, cited by The Guardian, Donald Trump Jr. said he had spent nearly a decade “cultivating relationships in India” and that the company was “now seeing the response of that effort”.

The president’s son said his itinerary was designed to steer clear of politics.

However, Donald Trump Jr. is listed as a keynote speaker at a global business conference, which will be attended by Indian politicians, including PM Narendra Modi and some of India’s business elite.

President Donald Trump handed over control of his business empire to Donald Jr. and Eric Trump before his inauguration last year.

However, the director of the US Office of Government Ethics said at the time that this did not go far enough to ensure there would be no conflict of interest between his politics and personal business.

Since taking office, critics have claimed President Trump is continuing to profit from his family’s business interests.

They have also accused the Trump family of playing up its connections with the White House in order to influence business deals.

In May 2017, the company owned by the family of Jared Kushner, Donald Trump’s son-in-law, pulled out of a real estate presentation in China.

Kushner Companies had been scheduled to pitch opportunities to real estate investors in China, but Jared Kushner’s sister was widely criticized for using his name in a pitch.

In November 2017, President Trump’s daughter, Ivanka, was criticized for speaking at a global entrepreneurs summit in Hyderabad, with some saying the summit had become more about Ivanka Trump and her namesake brand than the wider issue.