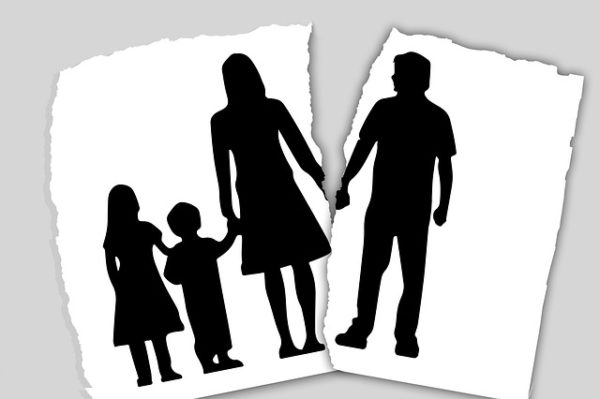 There isn’t a one-size-fits all sign that indicates it is time to part ways with your spouse, but a combination of signs and factors instead. When you took your marriage vows, you promised to love until death do you part. Sadly, many couples find it impossible to overcome obstacles in their relationship and break those vows. It is better to end an unhappy, irreconcilable marriage now than it is to prolong the inevitable.  If you’re reading this, divorce is likely something that’s already crossed your mind a time or two before. Pay attention to these five signs that indicate it is time to move forward in life,perhaps without the person you thought would be there forever.

You’re in it for the Kids

Staying together for the sake of the children may seem like the right thing to do but more often than not, it is actually the worst thing that you can do. Kids sense the energy and tension in a broken marriage, despite the belief of their parents. Plus, staying together for the kids causes you to miss out on life and many great experiences.

Abuse comes in many forms. It is unacceptable in any form.  Verbal abuse, financial abuse, and sexual abuse are often times just as disheartening as physical abuse for those enduring the pain. Remember, abuse is more than a punch. Immediately leave an unsafe situation and speak to an attorney concerning divorce immediately.

When you simply do not mingle with your spouse on the same level as you once did, perhaps you should part ways. Don’t allow the small stuff to send you running away from the marriage, however, pay attention to indications that you are no longer one, as you should be during a marriage. Are your values and goals different? Are your hopes, dreams, and views on raising a family or marriage different now? This may be reason enough to get a divorce.

You Want to Be Alone

When your spouse’s touches no longer have any significance or when you daydream of coming home to a spouseless property, it is likely ideal to part ways. It is not fair for either person to endure the hardships of a relationship that is done and over, but you just haven’t let go of yet.  If you want to be alone, that’s your prerogative and you should make the steps to achieve that status.

If you’ve tried counseling, therapy, hoping, praying, and even some tears but you still cannot seem to work things out, you should not wait any longer to reach out to a lawyer to discuss divorce. Sometimes love just isn’t enough to make a relationship work. You cannot force what just  isn’t there.

Divorce is never easy, but rest assured an attorney will minimize the stress of the ordeal so it is easier to close the matter and get on with life. If the signs say that it’s time to split, its probably a good idea to take the next steps to

Divorce is never easy for both parents and children. Everyone in the family feels an immense sense of anxiety and loss. The family who falls under the affliction of divorce will no longer be the same. Parents need to settle their own emotions, particularly the occurring guilt they feel towards their children.

While you cannot take away your child’s pain, you can help them deal with the various disappointments that a separation brings. Here are the things you can do.

How To Break the News?

Have a sincere conversation with your children together with your spouse. Then explain that you two are getting a divorce. Don’t try to sugarcoat, speak honestly but don’t include the ugly details.

Confess that the experience will be sad. See to it that your child understands that a divorce is only between the two of you. And repeatedly remind your child that he or she is not the reason for the divorce and that both of your love for him or her didn’t change.

It’s normal for children to show interests in concrete things such as “Do I need to change schools?”, “ Where will I live?” or “Who’s going to take me to my extra-curricular lessons?”  You need to maintain your child’s routine as much as possible while working out the terms of the divorce. Your child feels secure when he or she knows what to expect.

When the reality of the divorce finally settles to your children’s mind, expect to receive different reactions such as;

The situations above are just the common possibilities for a child’s reaction. Hence, it’s vital to encourage your child to open up his or her feelings about the divorce.

Make Sure Your Child Feels Well-loved

According to M. Gary Neuman, author of Helping Your Kids Cope With Divorce the Sandcastles Way and creator of the Sandcastles Divorce Therapy Program, children assume that they are somehow to blame when a parent regularly doesn’t come through.

If only they behaved more or do better in school, then surely their parents will stay together and be with them. As a result, their confidence hurdles. Thus, you need to reassure your child that your ex-spouse’s commitment issues have nothing to do with his or her lovability.

It could be tempting to take a break from your parental duties while your child is mourning over the divorce, but it will only generate more insecurity. Children thrive on structure, routine and consistency even if they insist on testing limits and boundaries. If your child divides time between two households, try to retain the same rules in two homes.

You can consider using the services of a family or divorce mediator if you and your spouse need help in reaching decisions about your child before, during or after the divorce. Most local and international divorce attorney would recommend you of doing so because your kids could also benefit from counseling especially if he or she is showing signs of anxiety and distress.

Divorce is always a hard blow for everyone, however, if both parents continue to build a calm and stable environment for their children and make them feel loved, children will survive the situation in good shape. And they will be calmer as they gradually accept everything.

Holly Petraeus, former CIA director’s wife of 38 years, has reportedly threatened David Petraeus with divorce after she was left “humiliated” by his affair with his biographer, Paula Broadwell, it has been claimed today.

Holly Petraeus is reportedly “furious” about the affair, which forced her husband to resign from the top of the CIA ten days ago, and is demanding to know how many other women he has shared trysts with throughout their marriage.

“She can’t turn on a television, go online or open a newspaper without being bombarded by the latest revelations about his cheating,” a source told the National Enquirer.

“No wonder she’s angry. David has been falling all over himself, apologizing and begging Holly to forgive him, but she isn’t listening. After all his lies, she doesn’t believe anything he says anymore, and she’s thinking about consulting a divorce attorney.”

The source claimed Holly Petraeus has suspicions that her husband had an affair with Jill Kelley, the Florida socialite who sparked his downfall after tipping off the FBI about threatening emails from Paula Broadwell.

While David Petraeus denies they have ever been involved, Holly Petraeus is uncertain and keeps demanding to know how many other women he has cheated on her with, the source said.

Jill Kelley has also denied any wrongdoing and said in a statement she was simply a friend of David Petraeus, whom she met through her work at MacDill Air Force Base in Tampa.

Holly and David Petraeus attended lavish garden parties at Jill Kelley’s Tampa, Florida mansion, where she lives with her husband, their three children and her twin sister, Natalie Khawam.

The Petraeuses have been married 38 years after meeting on a blind date when David Petraeus was a student at the military academy at West Point, where Holly’s father was the superintendent.

David Petraeus graduated in June 1947 and the couple married the following month, before going on to have two children, Ann and Stephen, and travelling throughout the world with his work.

Despite moving 24 times in 38 years, Holly Petraeus has also built her own career.

She became a volunteer, performing military and family support roles on bases, before working with service members as a financial advocate to ensure they were treated fairly by businesses.

In 2011, Holly Petraeus was appointed to the newly-created Consumer Financial Protection Bureau as head of the Office of Servicemember Affairs, a post she still holds.

Holly Petraeus’ threats of divorce come little more than a month after she and her husband were the picture of unity at their daughter’s wedding – three months after David Petraeus’ affair with Paula Broadwell had come to an end.

But on November 9, he stepped down from the CIA after the FBI uncovered his relationship with Paula Broadwell.

The affair was discovered after Paula Broadwell sent a string of “threatening” emails to military party planner Jill Kelley, whom she deemed a threat.

According to friends, Jill Kelley considered some of the anonymous messages death threats, after Paula Broadwell vowed to make Kelley “go away” – and the concerned housewife contacted the FBI.

The anonymous emails contained classified information about David Petraeus’ whereabouts and, thinking there had been a potential national security breach, the FBI was forced to investigate.

During their probe, they traced the emails back to Paula Broadwell and also uncovered emails revealing her months-long affair with David Petraeus, whom she had first met as a student in 2006.

In interviews and her biography of David Petraeus, All In, Paula Broadwell lauded Holly Petraeus as a “wonderful source of information” and revealed that she had read the book and enjoyed it.

In the book, Paula Broadwell recounted details from dozens of hours of interviews between Holly and David Petraeus in a description of how the couple met and fell in love.

Paula Broadwell described the relationship as virtually unbreakable – while at the same time carrying on an illicit affair with David behind Holly Petraeus’ back.