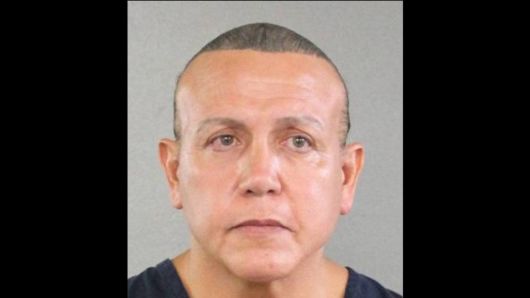 Cesar Sayoc has been arrested in Florida in connection with a mail-bombing campaign aimed at critics of President Donald Trump.

President Trump said the acts were “despicable and have no place in our country”.

Two were found in Florida and NYC on October 26.

The incidents come less than two weeks before the mid-term elections, with politics highly polarized.

Media reports say Cesar Sayoc was arrested at a vehicle parts shop in the city of Plantation, Florida.

FBI Director Christopher Wray revealed that the suspect was detained after his fingerprint was allegedly found on one of the packages.

Law enforcement agencies said Cesar Sayoc lives in Aventura, Florida. He reportedly has ties to New York and is a registered Republican.

In 2002, the man was arrested for making a bomb threat in Miami-Dade County, and received one year of probation for the charge.

Cesar Sayoc has a criminal record dating back to 1991 in Broward County, according to clerk records. He was arrested, aged 29, on a theft charge. He has also faced charges of fraud and battery.

Court records show Cesarr Sayoc filed for bankruptcy in 2012 while he was living with his mother. A handwritten note in his bankruptcy report reads: “Lives w/mom. Has no furniture.”

According to officials, DNA evidence was used to track him down.

Following his arrest, US TV broadcast live images of a white van, said to belong to Cesar Sayoc, being loaded on to a trailer in Plantation and towed away for examination.

The van’s windows were covered in images. One piece of artwork depicted President Trump standing on a tank and another showed Hillary Clinton with a bulls eye superimposed on her face.