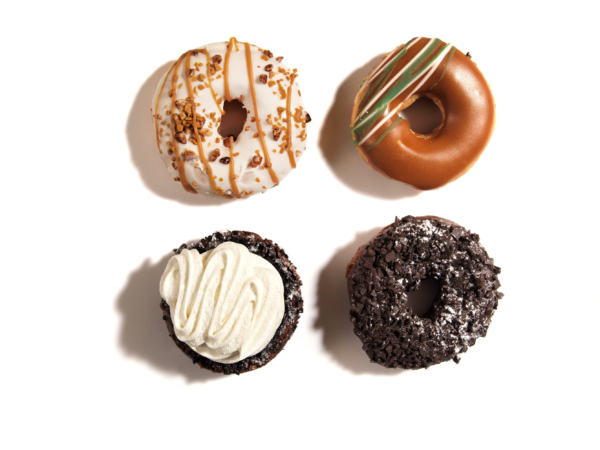 Summer is finally here! At least we think it is, it’s pretty difficult to tell with the weather changing every couple of minutes. Fortunately, one constant we can count on is summer 2018’s range of food trends. This year, the foods of the season seem to have been influenced by creativity, as well as our curiosity about the food staples of different cultures around the world. Whether you’re looking for healthy, cultural cuisine or completely bonkers, indulgent eats, here are just some to choose from this summer.

With every passing year, doughnuts seem to get more and more attention. There was a time when they were simply fried, sugary treats you’d get at a fairground stall or in a paper bag from the supermarket bargain bin, but these days they’re much more popular. Some doughnut aficionados like to decorate their creations with beautiful icing and delicate designs, others have binned the typical strawberry jam or custard fillings to replace them with champagne, matcha and other trendy ingredients. Even traditional doughnuts have seen a reawakening, appearing in decadent milkshakes often known as ‘freakshakes’, often paired with whipped cream, sprinkles and even chocolate bars.

While we’re on the topic of summer sweets, we absolutely have to mention rolled up ice cream. This trend that started in Thailand last year and is completely different to the usual scoops we’ve all come to know and love – both in looks and in flavour. Rolled up ice cream doesn’t just deal in the regular vanilla, strawberry and chocolate flavour staples, it goes for every flavour imaginable – from honey to avocado. There’s even a shop in Orange County, California named Sweet Cup where all they do is come up with fresh new ways to serve rolled up ice cream. Some popular recipes include Matcha Bliss and Rainbow Toad.

Over the last few years, Middle Eastern cuisine has become easier to get than ever, often appearing at street food festivals and on menus at restaurants serving cuisine from around the world. Hummus, pitta bread and tahini are just some of the foods you can probably find at your local supermarket, but none are receiving as much attention as falafel. Not only is falafel now available at every store worth its salt, it’s also becoming a favourite dish at Lebanese restaurants up and down the UK. London alone has several falafel-based dishes to offer, with each dish spinning its own take on the Middle Eastern staple.

Finally, let’s finish up with a drink. While you may be aware of craft beers and craft ciders, did you know that craft soft drinks are now a thing? It’s about time, too: we’ve been stuck with the same orange cordials for a long time and there’s only so long you can only pretend that adding in mango is “exotic”. These new craft soft drinks are often made using natural sweeteners and contain bespoke infusions, many of which seem to have been influenced by winter 2018’s gin trend. Juniper, lavender and hibiscus are a common recipe but don’t be surprised to see even more creative soft drink concoctions showing up at your local café, restaurant or deli.

We’re looking forward to trying all these yummy foods and indulging in the other emerging food fads on the horizon. Have you tried any of these upcoming summer food trends for 2018? Let us know in the comments below!