A train carrying Republican lawmakers to a retreat hit a truck on the track in Virginia, killing the driver, says the White House.

According to authorities, six people were injured, including another truck passenger who was airlifted out with critical injures.

No members of Congress or their staff were among the seriously hurt, officials said.

The National Transportation Safety Board (NTSB) confirmed they are investigating the cause of the accident.

The members of Congress – who included House Speaker Paul Ryan – were on their way to their annual retreat in Greenbrier, West Virginia, when the specially chartered Amtrak train crashed at 11:20 local time on January 31.

A photograph from the scene showed train passengers aiding emergency responders in helping the injured.

The victim has been identified as 28-year-old Christopher Foley, one of two passengers in the truck, which was a waste disposal vehicle.

Some train passengers were hurled from their seats by the collision, which happened near Crozet, Virginia, about 110 miles south-west of Washington DC.

Jason Lewis, a congressman from Minnesota, was taken to the hospital and treated for a possible concussion, his office said.

The congressman said: “I’m fine compared to, tragically, the truck drivers, and thankful for the prompt action of our doctors and first responders. My thoughts are with the family of the driver who passed away.” 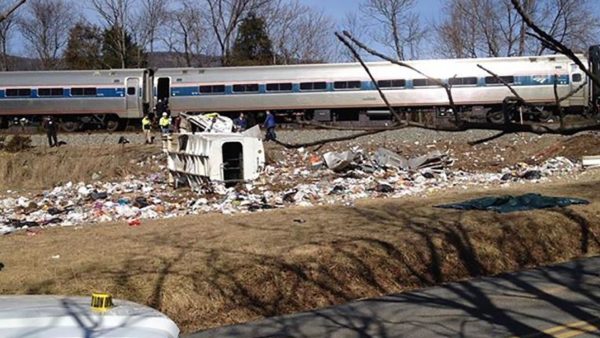 According to Utah Senator Mike Lee, the “garbage truck” was “cut in half”.

During a meeting at the White House, President Donald Trump said, “the train accident was a tough one. A tremendous jolt”.

The president said: “We don’t have a full understanding yet as to what happened but it was a train hitting a truck going at a pretty good speed.

“It looks like the driver of the truck was killed, it’s very sad to see that.”

White House spokeswoman Sarah Sanders said: “There is one confirmed fatality and one serious injury. There are no serious injuries among members of Congress or their staff.

“Senior Administration officials are in regular contact with Amtrak and state and local authorities.

“Our thoughts and prayers are with everyone that has been affected by this incident.”

President Donald Trump is due to visit the retreat on February 1.

Security officials and doctors for the lawmakers – as well as two congressmen who are ex-doctors – helped emergency officials, lawmakers said.

A Michigan congressman said that train passengers had gathered outside the train in prayer.

Tennessee Congressman Chuck Fleischmann said he was walking to the train’s toilet when the collision occurred, and he was injured.

According to a report by the Federal Railroad Administration, incidents between trains and cars crossing at railway tracks have increased in recent years. This is likely due to a higher traffic volume of cars on the road.

The NTSB said on January 31 that they had ruled out foul play as a possibility, but were investigating a range of factors in the crash.