Senator Al Franken has said he is planning to quit “in the coming weeks” after string of harassment allegations.

He said from the Senate floor: “I am proud that during my time in the Senate that I have used my power to be a champion of women.”

The Minnesota Democratic senator’s speech came a day after nearly 30 Democrats called on him to resign.

Al Franken would be the most prominent lawmaker to resign amid a wave of misconduct claims against high-profile figures.

Trent Franks of Arizona announced he was resigning as the inquiry was announced.

The congressman acknowledged having made two female congressional aides “uncomfortable” by asking them about surrogacy when he and his wife faced infertility.

The committee also said it would investigate Blake Farenthold, who used $84,000 of taxpayers’ money to settle a harassment lawsuit with his former spokeswoman. 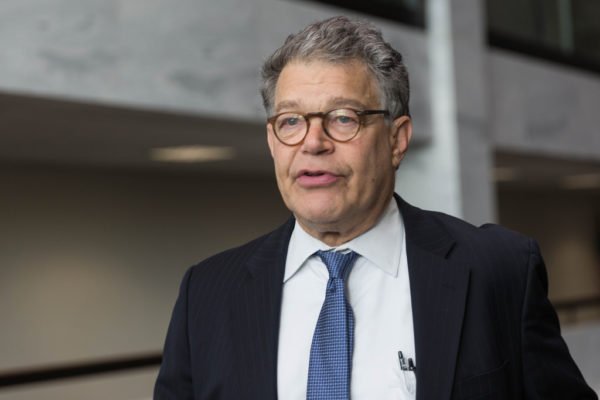 Over in the Senate, Al Franken told his colleagues on December 7: “Today I am announcing that in the coming weeks I will be resigning as a member of the United States Senate.

“I may be resigning my seat but I am not giving up my voice.”

The former Saturday Night Live comic and two-term senator has apologized to several women who have accused him of groping and harassment, but he faced mounting pressure to step aside after a new allegation surfaced on December 6.

Al Franken said some of the claims against him “are simply are not true”, but added that women “deserve to be heard and their experiences taken seriously”.

The senator also referenced the harassment allegations that have been leveled against President Donald Trump and Republican Alabama Senate candidate Roy Moore.

“I, of all people, am aware that there is some irony in the fact that I am leaving while a man who has bragged on tape about his history of sexual assault sits in the Oval Office, and a man who has repeatedly preyed on young girls campaigns for the Senate with the full support of his party.”

Al Franken is not the only politician to have found himself engulfed by harassment in recent weeks.

On December 5, Michigan Democrat John Conyers announced he would resign amid claims of harassment made by his congressional aides.

Several Democratic female senators – including some who called for Al Franken’s resignation a day earlier – hugged the lawmaker after his speech.

He tweeted: “We have a president who acknowledged on tape that he assaulted women. I would hope that he pays attention to what’s going on and think about resigning.”

Fellow Minnesota Senator Amy Klobuchar thanked Al Franken on Facebook, calling him a “friend to me and many in our state”.

The decision to fill the vacancy left by Al Franken will fall to Democratic Minnesota Governor Mark Dayton, who said in a statement he has not determined who will replace him.