Otto Warmbier’s parents have shared horrific details of his condition when he arrived home from North Korea.

In an interview with Fox and Friends, Fred and Cindy Warmbier said that the North Koreans were “terrorists” who had “systematically tortured” their son.

Otto Warmbier was jailed in Pyongyang in 2016 for stealing a hotel sign.

The American student was released on medical grounds in June 2017 but arrived home seriously ill and died days later.

North Korea has always denied mistreating Otto Warmbier. According to North Korean officials, he contracted botulism while in prison but US doctors found no trace of this.

In their first interview since their son’s death, Fred and Cindy Warmbier told Fox News that they “felt it was time to tell the truth about the condition that Otto was in”.

American doctors had previously described Otto Warmbier as being in a state of “unresponsive wakefulness”, but his parents said calling this a coma was “unfair”.

Fred Warmbier said when they saw his son he was “moving around, and jerking violently, making these howling and inhuman sounds”.

His head was shaved, he was blind and deaf, his arms and legs were “totally deformed” and he had a huge scar on his foot, he said. It “looked like someone had taken a pair of pliers and rearranged his bottom teeth”. 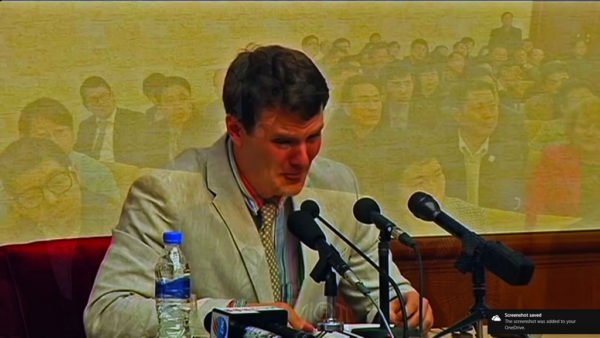 Fred Warmbier said: “Otto was systematically tortured and intentionally injured by Kim and his regime. This was no accident.”

He also said Otto had been abandoned by his family, his country and the world and that the government had given them no information about his death.

Cindy Warmbier said North Korea sent him home because “they didn’t want him to die on their soil”.

The family refused a post-mortem examination because they thought Otto had suffered enough and “I wasn’t going to let him out of my sight,” she said.

Cindy Warmbier also pleaded with people not to go to North Korea, saying it was “playing into” Pyongyang’s propaganda. US citizens are now banned from travelling to North Korea.

However, the Cincinnati Enquirer, a local newspaper has disputed the allegations made by Otto Warmbier’s parents.

The newspaper said it had obtained a copy of a coroner’s report on Otto Warmbier, based on an external examination, which revealed several small scars but nothing which indicated torture.

The Cincinnati Enquirer quoted the Hamilton County coroner as saying Otto Warmbier’s teeth were “natural and in good repair” and that he appeared to have died from brain damage caused by a lack of oxygen.

President Donald Trump, who is known to watch Fox and Friends, tweeted that it had been “a great interview”, and that “Otto was tortured beyond belief by North Korea”.

The president’s comment is likely to stoke the escalating tensions between North Korea and the US, which have exchanged allegations and threats at an unprecedented rate in recent weeks.