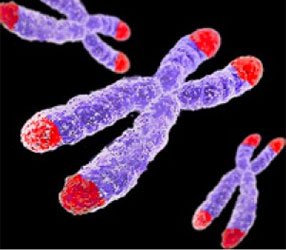 Telomeres, the complex structures that protect the end of chromosomes, of peripheral blood cells are significantly shorter in patients with familial breast cancer than in the general population. Results of the study carried out by the Human Genetics Group of the Spanish National Cancer Research Centre (CNIO), led by Javier Benitez, to be published in open-access journal PLoS Genetics on July 28th, reflect that familial, but not sporadic, breast cancer cases are characterized by shorter telomeres. Importantly, they also provide evidence for telomere shortening as a mechanism of genetic anticipation, the successively earlier onset of cancer down generations.

Mutations in two DNA repair genes, BRCA1 and BRCA2, characterize some, but not all, instances of hereditary breast cancer. Non-BRCA1/2 breast cancer families are heterogeneous, suggesting the existence of other genes conferring susceptibility. The group has investigated the role of telomere length in hereditary breast cancer based on previous information suggesting, first, that short telomeres and subsequent genomic instability contribute to malignant transformation; second, that genetic anticipation occurs in breast cancer families and, third, that telomere shortening is associated with anticipation in other genetic diseases. [googlead tip=”vertical_mare” aliniat=”stanga”]

By analyzing telomere length differences between mothers and daughters from breast cancer families, the authors demonstrated that genetic anticipation is associated with a decrease in telomere length in affected daughters relative to their mothers.

The results allowed the authors not only to conclude that women carrying BRCA1/2 mutation have chromosomes with short telomeres, but also to describe for the first time that genetic anticipation in breast cancer could be explained by telomere shortening. In addition, the study expands the field of research concerning genetic predisposition to breast cancer to include genes involved in telomere maintenance. The significance of generational changes in telomere length has interesting potential clinical applications in the management of familial breast cancer, and could be extended to other hereditary cancer syndromes.

FINANCIAL DISCLOSURE: This work was supported by Asociación Española Contra el Cancer (AECC) and Spanish Fondo de Investigaciones Sanitarias (grant numbers FISPI081298 and FIS-PI081120). The CIBER de Enfermedades Raras is an initiative of the ISCIII. The funders had no role in study design, data collection and analysis, decision to publish, or preparation of the manuscript.

COMPETING INTERESTS: The authors have declared that no competing interests exist.

This press release refers to an upcoming article in PLoS Genetics. The release is provided by journal staff, or by the article authors and/or their institutions. Any opinions expressed in this release or article are the personal views of the journal staff and/or article contributors, and do not necessarily represent the views or policies of PLoS. PLoS expressly disclaims any and all warranties and liability in connection with the information found in the releases and articles and your use of such information.

[googlead tip=”lista_medie” aliniat=”stanga”]PLoS Genetics (http://www.plosgenetics.org) reflects the full breadth and interdisciplinary nature of genetics and genomics research by publishing outstanding original contributions in all areas of biology. All works published in PLoS Genetics are open access. Everything is immediately and freely available online throughout the world subject only to the condition that the original authorship and source are properly attributed. Copyright is retained by the authors. The Public Library of Science uses the Creative Commons Attribution License.  [googlead tip=”lista_medie” aliniat=”centrat”]

About the Public Library of Science

The Public Library of Science (PLoS) is a non-profit organization of scientists and physicians committed to making the world’s scientific and medical literature a freely available public resource. For more information, visit http://www.plos.org.