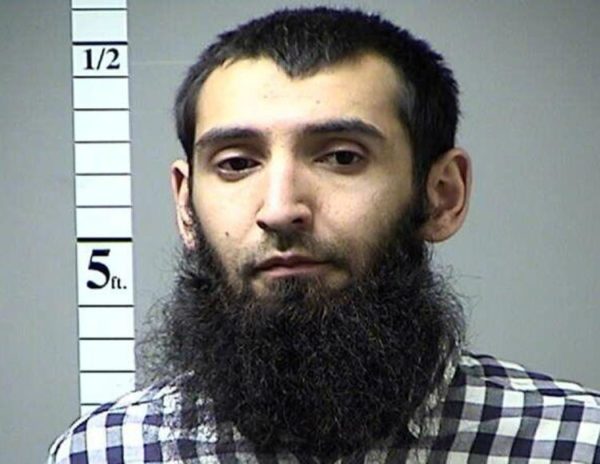 Sayfullo Saipov, the man accused of killing 8 people in Lower Manhattan by driving a truck down a cycle lane, was inspired by ISIS, police say.

NYPD Deputy Commissioner John Miller said that notes in Arabic claiming the attack on behalf of ISIS were recovered from the scene of the attack in New York.

Sayfullo Saipov, a 29-year-old Uzbek immigrant, was shot and injured by police.

The suspect is in hospital and under arrest.

John Miller said: “Based on the investigation overnight, it appears that Mr. Saipov had been planning this for a number of weeks.

“He did this in the name of ISIS, and along with the other items recovered at the scene was some notes that further indicate that.

“He appears to have followed almost exactly to a ‘T’ the instructions that ISIS has put out in its social media channels before, with instructions to their followers on how to carry out such an attack.”

One of the notes said “the Islamic State would endure forever”, the deputy commissioner added.

Police have sealed off Sayfullo Saipov’s home in Paterson, New Jersey, and are searching the premises.

ISIS has suffered a series of military setbacks in Syria and Iraq in recent months as US-backed forces take back territory the group considers its “caliphate”.

NYC has increased the police presence at key transport hubs, and there will be additional uniformed and plain-clothes police on duty at Sunday’s New York Marathon.

President Donald Trump said he was taking steps to end the diversity lottery program – the immigration system under which the suspect entered the country.

The president also attacked the US justice system, and said he would consider sending the suspect to the military prison at Guantanamo Bay, Cuba.

“We also have to come up with punishment that’s far quicker and far greater than the punishment these animals are getting right now,” he said.

NYC Mayor Bill de Blasio and New York Governor Andrew Cuomo have both praised the resilience of New Yorkers – and urged people not to “politicize” a tragedy that took eight lives.

Andrew Cuomo said the attacker was believed to have acted alone, telling reporters: “He is a depraved coward, is what he is, and he was associated with ISIS, and he was radicalized domestically.”

Mayor Bill de Blasio and Governor Cuomo also suggested New York’s strict gun control laws had ensured that high-powered weapons could not get into the hands of terrorists.

Sayfullo Saipov rented the truck from a New Jersey branch of retailer Home Depot on October 31 before driving to NYC and entering the bike lane, police said.