Eric Garner’s daughter, Erica, who became a civil rights activist against police brutality after the death of her father in 2014, has died aged 27.

Three years ago, a video of Eric Garner, in a police chokehold complaining he could not breathe, sparked national protests.

She had been in a coma since December 23 after suffering a heart attack triggered by an asthma attack.

Erica Garner’s official Twitter account, being run by her family, said she had suffered major brain damage from a lack of oxygen.

A tweet posted to her account said: “When you report this you remember she was human: mother, daughter, sister, aunt. Her heart was bigger than the world. It really really was.”

“She cared when most people wouldn’t have. She was good. She only pursued right, no matter what. No one gave her justice.” 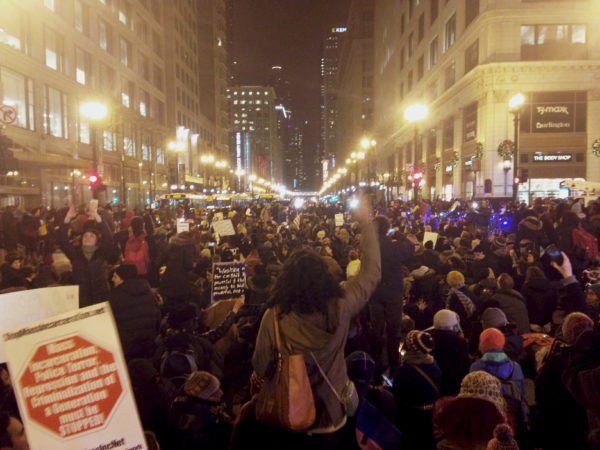 His words became a rallying cry for Black Lives Matter protesters, and the video of the arrest made headlines around the world.

Eric Garner’s death was ruled a homicide by medical examiners, but a grand jury did not charge any arresting officers in the case.

Erica Garner was a mother-of-two, and had a son in August whom she named after her father.

Recent events that have become the center of our 24 hour news cycle are drawing increasing attention to the subject of police brutality in our society. It is an issue that has been met with unrest by many. Riot gear, tear gas, and other uses of excessive force are turning police forces from entities that exist to protect and serve, into entities that exist creating fear and contempt in the minds of civilians. There are however, ways that these social fears can be turned into opportunities for progression. Here are a few ways that this can be done:

Get involved from the inside- out

If you find that this issue hits close to home or incites your passions for social change the best possible way to affect change in this area is to get as close to the problem as you can.

Join a police force or academy and begin to understand these issues from the perspective of police. Police officers are the people on the ground that make these decisions every day and put themselves in the line of fire in order to make the community safer. If you want to be heard get on the inside; let your actions speak as loudly as your words.

Another way to get on the inside is to make the subject of criminal justice your major area of study and join the system armed with the knowledge you need to be able to change it. Criminal justice colleges in PA especially offer programs and the opportunity to become more educated on the system and how it can be augmented to meet the concerns of the public. Make it an issue, then vote for it

The democratic process is the oldest and most effective way that change can be implemented on a large scale; make it an issue and vote for it.

First and foremost, contact those that represent you. Politicians get elected by their constituents on their ability to satisfy the needs of those who vote for them. Write letters, emails, and make phone calls. Also, make your voice as loud as you can. Team up with those that think alike and are motivated to join the challenge to change that which ails our society.

Young people are the most underrepresented group of voters in today’s society, because they don’t vote. For young people who want change, the strength of your voice is in its weakness. Raising awareness not only for this specific change but also for increased voting of people ages 18-29 could go a long way in establishing younger concerns in politics. For those of us whose age groups actually visit the polls understand that your voice is the loudest one, because you vote the most; use it.

This encompasses all that has been said in this article. Free speech protects your right to demonstrate, yell, and scream; but, it doesn’t empower you to light vehicles on fire or loot local stores, or cause general unrest. If police brutality is an issue that you feel strongly should change, do it through the proper mediums; in ways that respect the laws and those who enforce them. If social unrest takes a nasty turn into rioting, the danger for an officer escalates, and is more likely to result in the use of brute force.