The two leaders briefly met at the APEC summit in Vietnam.

“He said he absolutely did not meddle in our election,” Donald Trump said.

The US intelligence community concluded earlier that Russia had indeed tried to sway the poll in favor of Donald Trump.

President Trump has refused to acknowledge a reported assessment by the CIA and other intelligence agencies that Russia was behind the hacking of the Democratic National Committee (DNC) in the run-up to the 2016 presidential election.

The contents of the emails, passed to WikiLeaks and posted online, were embarrassing to the Democrats and shook up the presidential campaign, which ended in defeat for Hillary Clinton.

In addition to Robert Mueller’s inquiry, congressional committees have been set up to carry out their own investigations.

Relations between the US and Russia have been strained for years, with the Kremlin long accusing Washington of seeking to sway elections in Russia and other ex-Soviet states including Ukraine and Georgia.

While Russian hackers are widely suspected of involvement, there has been no conclusive link to the Kremlin.

Denying that Russia had tried to interfere last year by fostering contacts with Donald Trump’s campaign, Vladimir Putin told reporters in Vietnam: “Everything about the so-called Russian dossier in the US is a manifestation of a continuing domestic political struggle.”

President Trump said he believed President Putin had been “very insulted by” the allegations and that was “not a good thing” for America.

“He [Vladimir Putin] said he didn’t meddle,” the president added.

“I asked him again.”

Asked if he believed President Putin, Donald Trump replied: “He is very, very strong in the fact that he didn’t do it. You have President Putin very strongly, vehemently says he has nothing to do with that. Now, you are not going to get into an argument, you are going to start talking about Syria and the Ukraine.”

In a defiant address at the Asia-Pacific Economic Co-operation (APEC) summit in Vietnam, President Donald Trump has said the US will no longer tolerate “chronic trade abuses”.

The president said he would always put US interests first and APEC nations should “abide by fair reciprocal trade”.

Donald Trump has visited China and Japan as part of his five-nation Asia tour.

APEC brings together 21 economies from the Pacific region – the equivalent of about 60% of the world’s GDP.

Since taking office, President Trump has pursued his “America First” agenda and pulled the US out of the regional Trans-Pacific Partnership – a major trade deal with 12 APEC nations – arguing it would hurt US economic interests.

In a speech in the Vietnamese port city of Da Nang on November 10, President Trump railed against the World Trade Organization, which sets global trade laws, and said it “cannot function properly” if all members do not respect the rules.

Donald Trump complained about trade imbalances, saying the US had lowered market barriers and ended tariffs while other countries had not reciprocated.

“Such practices hurt many people in our country,” the president said, adding that free trade had cost millions of American jobs.

However, President Trump did not lay the blame on APEC countries, and instead accused earlier US administrations of not acting earlier to reverse the trend.

He said America would make bilateral agreements with “any Indo-Pacific partner here who abides by fair reciprocal trade”, but only “on a basis of mutual respect and mutual benefit”.

President Trump has repeatedly referred to the region as “Indo-Pacific”, a term used to define America’s new geopolitical view of Asia.

He had travelled to Da Nang from Beijing, where he had also discussed America’s huge trade imbalance with China.

After attending the APEC summit, President Trump will pay a state visit to the Vietnamese capital Hanoi.

The president will end his 12-day Asian tour in the Philippines on November 13.

During his visit to South Korea, President Donald Trump has urged North Korea to “come to the table” and discuss giving up its nuclear weapons.

Striking a different tone from previous fiery rhetoric, the president said he “hoped to God” he did not have to use the US military against North Korea.

Donald Trump was speaking at a press conference with South Korea’s President Moon Jae-in in Seoul, as part of his tour of Asia.

The president has previously threatened “fire and fury” against North Korea.

Donald Trump is on a five-nation tour of Asia, where Pyongyang’s nuclear ambitions have been high on his agenda.

At a press conference, Presidents Trump and Moon reiterated their call for Pyongyang to denuclearize, with Donald Trump saying it “makes sense for North Korea to come to the table”, and to “do the right thing, not only for North Korea but for humanity all over the world”.

The two leaders also called on China and Russia to put pressure on North Korea, and said they were lifting the limit on South Korean missile payloads, which they had agreed to do in September. 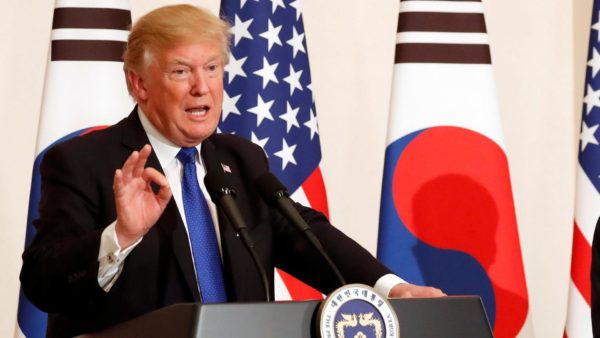 President Trump also said that South Korea would be ordering “billions of dollars” in military equipment from the US, which he said would reduce their trade deficit.

It was unclear if a deal was already struck, but Moon Jae-in said they had agreed to “begin consultations on acquisitions” that would enhance South Korea’s defense capabilities.

President Trump had earlier tweeted that “massive military and energy order” from Japan were also happening, and claimed on November 6 that Japan could shoot down North Korea’s missiles with US equipment.

Japan’s PM Shinzo Abe said earlier that he was considering it.

Though the President Trump will only spend about 24 hours in South Korea, it is perhaps the most symbolic stop in his Asian tour.

His visit is designed to bolster the military alliance that has long protected South Korea, and strength in unity is the message they want to send to North Korean leader Kim Jong-un just across the border.

However, the two presidents also have their differences. President Trump has previously accused Moon Jae-in’s government of trying to appease North Korea.

Donald Trump has also previously criticized the free trade agreement between the US and South Korea, and has made clear he wants to re-negotiate its terms.

During the press conference, President Trump said the deal had been “quite unsuccessful” for the US, and that the two countries were going to “pursue a much better deal”.

Protests against Donald Trump, as well as counter-rallies welcoming him, have been held in Seoul and elsewhere.

President Trump will be going to China, Vietnam and the Philippines in the coming week.

President Donald Trump has begun an 12-day trip to Asia during which he will visit Japan, South Korea, China, Vietnam and the Philippines.

The trip will be the longest tour of Asia by an American president in 25 years.

It comes at a time of heightened tensions with North Korea over its nuclear program and missile tests.

President Trump is expected to show a united front with South Korea and Japan while pressing China to take a stronger line with North Korea.

He flew first to Hawaii where he visited the USS Arizona Memorial at Pearl Harbor – the scene of the 1941 Japanese attack that drew the US into World War Two.

He also took part in a briefing at the US Pacific Command.

From Hawaii, the president and First Lady Melania Trump will head to Japan and then on to South Korea.

President Trump has previously exchanged some fiery rhetoric with North Korea over its ballistic missile tests but aides said earlier this week that he would not go to the heavily fortified demilitarized zone (DMZ) on the border between South and North Korea.

He is, however, to visit Camp Humphreys, a US military complex south of Seoul.

In Vietnam, President Trump will attend the Asia-Pacific Economic Co-operation summit in Da Nang and make a state visit to Hanoi.

His final engagement will be a summit of South East Asian nations in the Philippine capital, Manila.

The last time an American president made such a marathon trip to Asia was when George H.W. Bush visited the region in late 1991 and early 1992.