Nearly 250 million are affected, and at least 19 deaths have been linked to the storm that extends more than 2,000 miles from Quebec to Texas.

Thousands of flights have been cancelled during the festive period.

The western US state of Montana is the worst hit by the cold, with temperatures dropping to -50F.

Near white-out conditions have been reported in Minnesota, Iowa, Wisconsin and Michigan. In the city of Buffalo, New York state, the US National Weather Service (NWS) reported “zero mile” visibility.

In the Pacific Northwest, some residents ice-skated on frozen streets in Seattle and Portland.

Even the usually milder southern states of Florida and Georgia are experiencing hard-freeze warnings.

The only region that has largely been spared the cold weather is California where continental mountain ranges are helping to protect the Golden State.

In Canada, the provinces of Ontario and Quebec were bearing the brunt of the Arctic blast.

Much of the rest of the country, from British Columbia to Newfoundland, was under extreme cold and winter storm warnings.

A number of the storm-related fatalities have involved road traffic accidents, including a 50-car pile-up in Ohio that killed four motorists. Another four died in separate crashes in the state.

Travel problems across the country were being exacerbated by a shortage of snowplough operators, with low pay rates being blamed.

The NWS says more than 100 daily cold temperature records could be tied or broken over the next few days.

The US East Coast is shivering in a record-breaking freeze in the wake of a deadly “bomb cyclone” that dumped snow as far south as Florida.

In parts of US and Canada, temperatures were forecast to fall below -20F, with wind chill making it feel more like -90F on January 5.

In Canada, high winds have knocked out power for tens of thousands of residents in Nova Scotia.

Thousands of snow ploughs are clearing roads across the East Coast.

On January 5, the National Weather Service (NWS) predicted dangerously low temperatures moving into the weekend as frigid air lingering over the North Pole prowls towards the US mid-Atlantic region.

In Massachusetts, residents of Boston, which received over 1ft of snowfall, were clearing the streets with shovels.

It comes just days after a phenomenon described as a “bomb cyclone” brought heavy snowfall to a wide area along the East Coast, as well as hurricane-force winds. 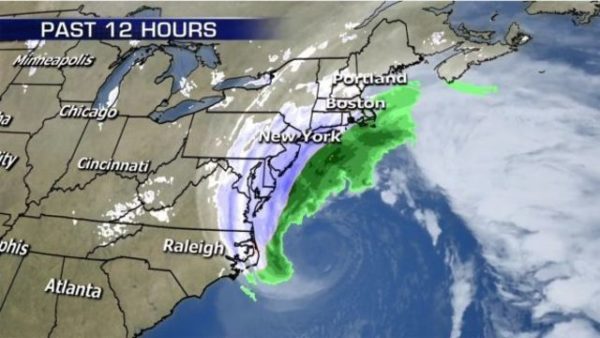 According to reports, the extreme weather has so far been linked to up to 19 deaths in the US and two more in Canada.

Four deaths were reported in traffic accidents in North and South Carolina. Further fatalities occurred in Wisconsin, Kentucky and Texas.

In Philadelphia, a car was unable to stop at a railway line at the bottom of a steep hill and was hit by a commuter train, killing a passenger in the vehicle.

In Virginia, a girl was fatally struck by a car while sledging, and a 75-year-old man was killed after being hit by a snow plough.

In Perth Amboy, New Jersey, where the temperature averaged 20F on January 4, a 13-year-old girl died and 35 others suffered carbon-monoxide poisoning in an apartment building. Seven of those treated were first responders.

The extreme weather caused travel chaos and led to the cancellation of thousands of flights on January 4 and 5.

Most flights have since resumed at airports in New York and Boston.

Experts say the so-called bomb cyclone storm drew moisture and strength from as far south as the Caribbean Sea.

New Hampshire’s Mount Washington, which boasts of having the “world’s worst weather”, was forecast to experience a wind chill temperature as low as -90F on January 5.

Law enforcement in Indiana issued a joke warrant for the arrest of the heroine in Disney movie Frozen, blaming her for the cold snap.