At least 235 people have been killed after militants launched a bomb and gun attack on a mosque in Egypt’s North Sinai province, state media say.

The al-Rawda mosque in the town of Bir al-Abed was targeted during Friday prayers.

The attack is the deadliest of its kind since an Islamist insurgency in the peninsula was stepped up in 2013.

No group has yet claimed the attack, but militants affiliated with ISIS have been responsible for scores of deadly attacks in the province.

ISIS militants usually target security forces and Christian churches, and the bloody attack on a mosque associated with Sufi Muslims has shocked Egypt.

According to witnesses, dozens of gunmen arrived in off-road vehicles and bombed the packed mosque before opening fire on worshippers as they tried to flee.

The assailants are reported to have set parked vehicles on fire in the vicinity to block off access to the mosque.

Pictures from the scene show rows of bloodied victims inside the mosque. At least 100 people were wounded, reports say, overwhelming hospitals. 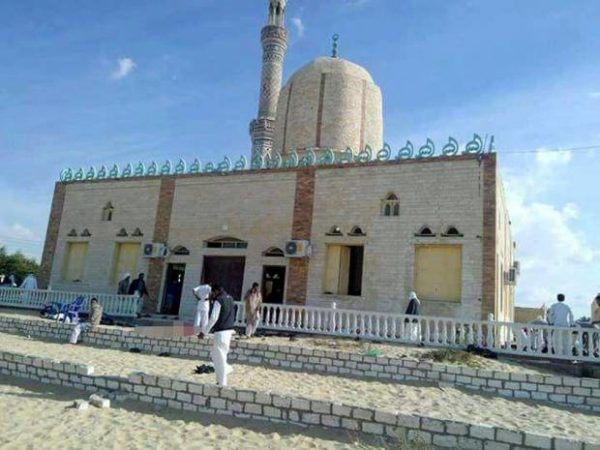 Bir al-Abed is about 130 miles from Cairo.

Locals are quoted as saying that followers of Sufism, a mystical branch of Sunni Islam, regularly gathered at the mosque.

Although Sufis are widely accepted across much of the Muslim world, some jihadist groups, including IS, see them as heretics.

The head of ISIS’ religious police in Sinai said last December that Sufis who did not “repent” would be killed, after the group beheaded two elderly men reported to be Sufi clerics.

The victim of the mosque attack also included military conscripts.

Militant Islamists have been waging an insurgency on the Sinai Peninsula in recent years, stepping up attacks after Egypt’s military overthrew Islamist President Mohammed Morsi after mass anti-government protests in July 2013.

Hundreds of police, soldiers and civilians have been killed since then, mostly in attacks carried out by Sinai Province group, which is affiliated to ISIS.

Sinai Province is thought to want to take control of the Sinai Peninsula in order to turn it into an Islamist province run by ISIS.