Monica Lewinsky has said her relationship with former President Bill Clinton constituted a “gross abuse of power” on his part.

The former White House intern was 22 when she became romantically involved with the then president, who was 27 years her senior.

Monica Lewinsky has written an article for Vanity Fair magazine, reflecting on events after the #MeToo movement.

She also revealed that she was diagnosed with PTSD after the scandal.

The condition was caused by being “publicly outed and ostracized” as the affair unraveled in the press and courts, Monica Lewinsky says.

News of Monica Lewinsky and Bill Clinton’s relationship dominated the US news agenda in 1998 and 1999, after the president initially denied it before admitting to “inappropriate intimate physical contact” with the former White House intern.

House Republicans then started impeachment proceedings against President Clinton, arguing he had lied to federal investigators. That effort eventually failed, and Bill Clinton remained in power until 2001. 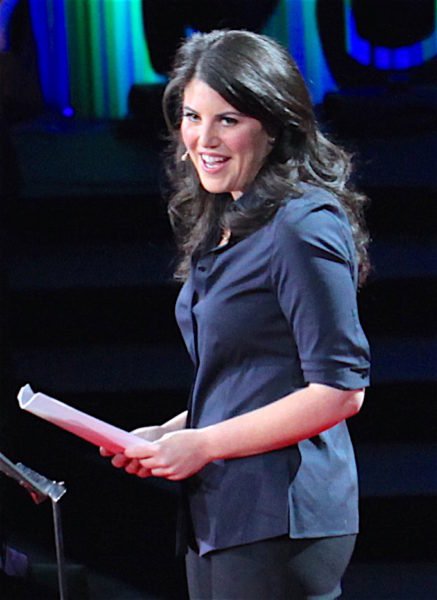 Monica Lewinsky is back as Vancouver TED 2015 speaker

Monica Lewinsky Vanity Fair article: “I deeply regret what happened between me and President Clinton”

Monica Lewinsky, now 44, says she stands by her 2014 comments that their relationship was consensual, but muses about the “vast power differentials” that existed between the two.

She says she had “limited understanding of the consequences” at the time, and regrets the affair daily.

The former White House intern wrote: “The dictionary definition of “consent”? To give permission for something to happen.”

“And yet what did the ‘something’ mean in this instance, given the power dynamics, his position, and my age?…He was my boss. He was the most powerful man on the planet. He was 27 years my senior, with enough life experience to know better.”

In the Vanity Fair essay, Monica Lewinsky also discusses the growing movement of women publicly speaking out against harassment and assault.

A collection of Monica Lewinsky’s old clothes, handwritten notes, and gifts signed pictures of former President Bill Clinton are now up for sale for thousands of dollars.

Before she became notorious for her relationship with President Bill Clinton, Monica Lewinsky also had an affair with her married former high school drama teacher Andy Bleiler.

Andy Bleiler gained momentary international recognition during the investigation into Monica Lewinsky’s affair with President Bill Clinton, as he came forward and told about their lengthy affair.

Though it is unclear when or how his marriage to then-wife Kathy ended, the two have since split and for some reason, Kathy ended up with a collection of clothes and gifts that the couple got from Monica Lewinsky over the years.

All of these items were included as part of the evidence gathered by Kenneth Starr, the independent counselor pursuing the impeachment charges over the affair.

Andy Bleiler’s ex-wife, who now goes by Kate Nason, handed the lot over to an unidentified third party, who has since put the goods up for auction.

“Monica was friends with the couple, so I think she gave some of her clothes to Kathy, just to wear they may have exchanged some of the clothes,” said Laura Yntema, an auction manager at Nate D. Sanders.

A collection of Monica Lewinsky’s old clothes, handwritten notes, and gifts signed pictures of former President Bill Clinton are now up for sale for thousands of dollars

Included are eight pieces of clothing that was “gifted to Kate Bleiber” including a floor-length negligee. Monica Lewinsky’s weight has been the subject of ridicule in the past, and the clothes that she gave the Bleilers are all sizes L and XL.

The infamous blue dress is not included in the group of items up for sale.

While her old baggy jackets may not seem directly related to the presidential affair, there are a number of other gifts and items that Monica Lewinsky gave her former teacher from her time working as a White House intern.

There are two auto-pen signed photos of Bill Clinton- and one with him alongside Hillary- that Monica Lewinsky sent to Andy Bleiler.

In her role as a White House staffer, it would not have been unusual for her to submit a request for a personalized photo to be signed in the style of the president.

Monica Lewinsky also arranged for the president to write a birthday note to Andy Bleiler, who she carried on a five-year affair with including some time when her relationship with the two men overlapped.

“Dear Andy: Hillary and I want to personally extend our warmest wishes to you as you gather with your family and friends to celebrate your birthday. As you look forward to the year ahead, please accept our best wishes for good health and much happiness. Happy Birthday!” the typed note from President Bill Clinton wrote.

All of that correspondence would likely have gone through the proper channels at the White House given that they were composed on official letterhead.

Monica Lewinsky also gifted a pack of White House matches and boxes of M&Ms with the seal of the president.

The lot is being sold by Nate D. Sanders, a memorabilia collector, and has received one bid of $2,500 so far. The sale will close in three days time.

“Most of the bidding happens on the last day,” she said.