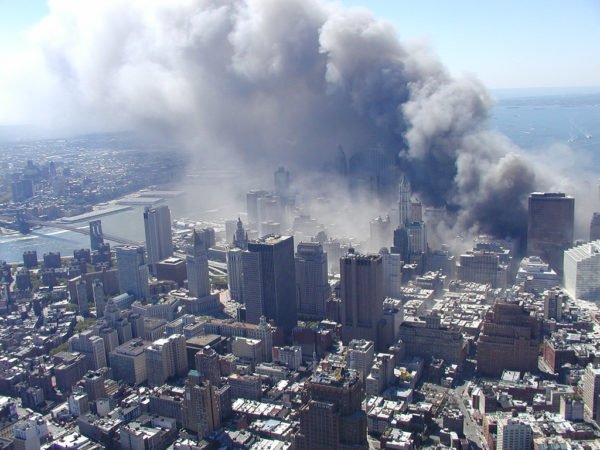 America remembers 10 years from September 11, 2001, when terrorists flew planes into the World Trade Center and Pentagon.

This weekend has been dedicated to remembrance, with hundreds of ceremonies across the country and around the globe.

Former presidents George W. Bush and Bill Clinton were among guests at dedication in Shanksville, Pennsylvania, of memorial to Flight 93 hijackers on Saturday. Former presidents George W. Bush and Bill Clinton were among guests at dedication in Shanksville, Pennsylvania, of memorial to Flight 93 hijackers on Saturday

Other memorials are planned for Sunday in New York,such as a memorial mass at St Patrick’s Cathedral in New York and Washington D.C. as nation mourns the almost 3,000 victims.

Former president George W. Bush has praised the 40 passengers and crew who fought back against their Flight 93 hijackers on 9/11 for carrying out what he described as one of the most courageous acts in U.S. history.

Saturday, former president George W. Bush was at the ceremony dedicating a memorial at the nation’s newest national park in Shanksville, Pennsylvania, as the U.S. marks the 10th anniversary of the terror attacks.

Americans will also come together on Sunday where the World Trade Center soared in Manhattan, New York, and in Washington D.C. where the Pentagon now stands as a fortress once breached. The World Trade Centre ceremony in New York begins at 8:30 am local time, with a moment of silence 16 minutes later - coinciding with the exact time when the first tower was struck by a hijacked jet

Other ceremonies wil take place on Sunday at the Pentagon and in lower Manhattan for the dedication of the national September 11 memorial.

President Barack Obama planned to attend ceremonies at both sites, as well as the Pennsylvania memorial, and was scheduled to speak at a Sunday evening service at the Kennedy Center.

The World Trade Centre ceremony in New York begins at 8:30 am local time, with a moment of silence 16 minutes later – coinciding with the exact time when the first tower was struck by a hijacked jet.

After this moment, there will be the reading of names of the 2,977 people killed on September 11 – in New York, at the Pentagon and in rural Pennsylvania. The "Tribute in Lights" could be seen in New York on Saturday night, shining into the sky as a mark of remembrance of the World Trade Centre Twin Towers

The “Tribute in Lights” could be seen in New York on Saturday night, shining into the sky as a mark of remembrance of the World Trade Centre Twin Towers. Americans will come together on Sunday where the World Trade Center soared in Manhattan, New York

At Shanksville, Pennsylvania memorial, George W. Bush said the Flight 93 cockpit storming “ranks among the most courageous acts in American history” and former president Bill Clinton said the passengers and crew were “ordinary people given no time at all to decide” what to do.

Bill Clinton likened the actions of those aboard Flight 93 to the defenders of the Alamo in Texas or the Spartans at the Battle of Thermopylae some 2,500 years ago, who knew they were going to die.

“They saved the capital from attack and avoided Al Qaeda’s a symbolic victory of smashing the centre of American government.”

The speeches of George W. Bush and Bill Clinton drew standing ovations and loud cheers from the ceremony which drew about 5,000 people, including 4,000 invited guests including the victims’ families.

Vice President Joe Biden was on hand to unveil the Wall of Names at the memorial – a set of 40 marble slabs, each inscribed with the name of a passenger or crew member who died.

Former first lady Laura Bush and Jill Biden, wife of Vice President Biden, were both seen to wipe tears away at the ceremony.

“The moment America’s democracy was under attack our citizens defied their captors by holding a vote,” George W. Bush said, referring to when those on the plane decided to try to overpower the hijackers.

“The choice they made would cost them their lives,” he added.

George W. Bush was joined at the ceremony by the Reverend Daniel Coughlin, who was the U.S. House chaplain at the time of the attacks.

On Sunday Americans will gather to pray in cathedrals, lay roses before fire stations and remember the anniversary of the most devastating terrorist attacks since the nation’s founding.

President Barack Obama has already been paying tribute to America’s resilience and the sacrifice of its war, after he made a pilgrimage to Arlington National Cemetery in Virginia on Saturday. Barack Obama was seen strolling with his wife, Michelle, among graves filled with dead from the Afghanistan and Iraq wars

Barack Obama was seen strolling with his wife, Michelle, among graves filled with dead from the Afghanistan and Iraq wars – and said the U.S. cannot be broken by terrorism “no matter what comes our way”.

“The terrorists who attacked us that September morning are no match for the character of our people, the resilience of our nation, or the endurance of our values,” Barack Obama said in a weekly address.

Barack Obama was a little-known state senator in Illinois at the time of the attacks, but now has the responsibility to help lead the nation in remembrance of a trauma 10 years on.

“The country was not broken, but rather, it was more united in the days after September 11 than at any time in my lifetime,” Rudy Giuliani said.