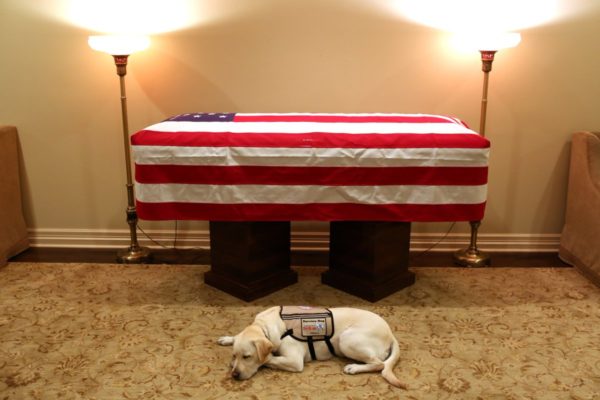 President Donald Trump and First Lady Melania Trump have paid their respects to former President George H.W. Bush as he lies in state at the United States Capitol.

President Trump made a brief visit to the rotunda, where the public can visit the coffin until the funeral on December 5.

Donald Trump has in the past clashed with the Bush family but will attend the funeral service.

George H.W. Bush, who died on November 30 at the age of 94, will later be buried at his Texas home alongside his wife, Barbara.

His coffin had earlier left Texas to a 21-gun salute and was carried to Washington on board Air Force One – temporarily renamed Special Air Mission 41 in homage to the late president.

George H.W. Bush, who served as the 41st president between 1989 and 1993, had been receiving treatment for a form of Parkinson’s disease and had been admitted to hospital with a blood infection in April.

The public will be able to pay respects at the rotunda until December 5, when an invitation-only funeral service will take place at the National Cathedral.

President Trump will attend with the first lady but will not deliver a speech.

According to Mark Updegrove’s book The Last Republicans, which came out in 2017, George H.W. Bush voted for Donald Trump’s opponent Hillary Clinton in the election and had called him a “blowhard”.

Former President George W. Bush, worried he would be the “last Republican president”, despite Donald Trump running on the party’s ticket, the book said.

A service was held in the rotunda after George H.W. Bush’s coffin arrived on December 4, with members of the military serving as pallbearers. George W. Bush was in attendance and was clearly moved by the events.

In a eulogy, House Speaker Paul Ryan said: “Here lies a great man”, adding that “no-one better harmonized the joy of life and the duty of life”.

Paul Ryan said George H.W. Bush was a “great leader and a good man, a gentle soul of firm resolve”.

Vice-President Mike Pence said there was a “kindness about the man that was evident to everyone who met him”.

George H.W. Bush was a decorated fighter pilot in World War II, a head of the CIA and vice-president to Ronald Reagan before being elected president in 1988.