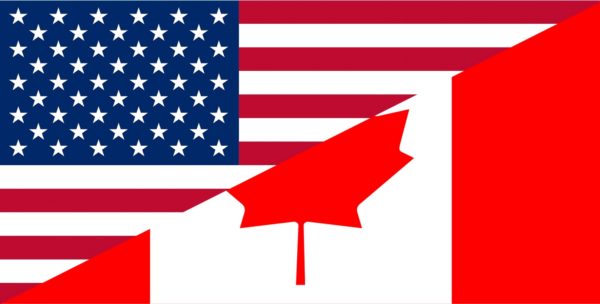 The United States and Canada have reached a new trade deal, along with Mexico, replacing the current North American Free Trade Agreement (NAFTA).

The US-Mexico-Canada Agreement (USMCA) gives the US greater access to Canada’s dairy market and allows extra imports of Canadian cars.

The deal has 34 chapters and governs more than $1 trillion in trade.

President Donald Trump, who has long sought to change NAFTA, said the new deal was “wonderful”.

Until recently it looked as if Canada could be excluded from a final trade agreement to replace NAFTA which has been in place since 1994.

The new USMCA is intended to last 16 years and be reviewed every six years.

Following the agreement, President Trump tweeted: “Late last night, our deadline, we reached a wonderful new Trade Deal with Canada, to be added into the deal already reached with Mexico. The new name will be The United States Mexico Canada Agreement, or USMCA. It is a great deal for all three countries, solves the many……”

The US has been fighting trade wars on several fronts this year, including placing tariffs on steel and aluminum imports from Mexico and Canada, as part of Donald Trump’s America First policy. Tariffs on cars are also threatened.

The hundreds of pages of the agreement were released on October 1 and contain updated arrangements for Canada’s dairy industry and measures aimed at shifting lower-paid car jobs from Mexico.

On dairy, US farmers will have access to 3.5% of Canada’s $16 billion-a-year dairy market.

On cars, Canada and Mexico have a quota of 2.6 million cars they can export to the US as a protection for their car industry if the US imposes a 25% global tariff on car imports.

In addition, 40% of car parts of vehicles produced in the USMCA area must be made in areas of North America, paying wages of $16/hour.

On the lumber (or wood) industry, Canada secured protection from US anti-dumping tariffs through the preservation of a dispute-settlement mechanism.

The US made a deal with Mexico in August, but relations with Canada over the trade pact had become increasingly strained in recent weeks.

The Trump administration set September 30 as a deadline for Canada to strike a deal.

A protectionist policy under the Trump administration has seen the US forge ahead with individual trade deals, rejecting bigger multi-lateral trade agreements and posing a challenge to decades of global free trade.

As part of this policy President Trump has also launched a trade war against China, which has already hurt companies and could curb global economic growth.