President Donald Trump has asked NATO allies to agree to double the current target of their annual GDP to military spending and to commit to 4%.

The White House confirmed President Trump had made the remarks during the NATO summit in Brussels, Belgium.

The meeting also saw Donald Trump single out Germany for criticism over its defense spending.

NATO Secretary-General Jens Stoltenberg said the main focus should be on all members reaching the current target of 2% of GDP.

He declined to answer a specific question about President Trump’s remarks, but told reporters: “I think we should first get to 2%, focus on that now… the good thing is that we are moving to that.”

For decades after the end of the Cold War, he said, NATO countries had cut defense budgets as tensions fell – and now needed to increase them at a time when tensions were rising. 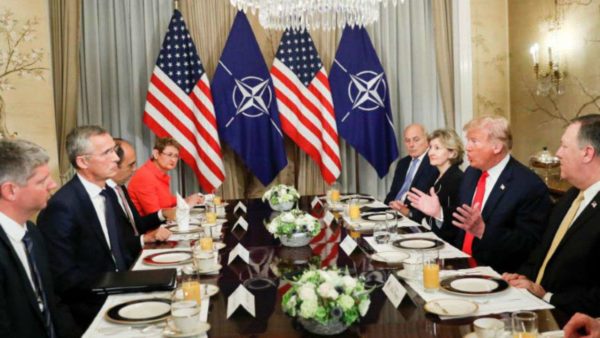 Donald Trump: “All NATO Allies Must Pay Their Fair Share of Defense Spending”

Previous US presidents have urged Europe to take more responsibility for their defense and reduce the burden on US taxpayers of maintaining forces in Europe long after the end of the Cold War – but none as bluntly as President Trump.

The NATO summit in Brussels comes less than a week before President Trump is due to hold his first summit with Vladimir Putin, in Helsinki, reviving concerns among US allies over his proximity to the Russian president.

President Trump’s main objection is that all but a handful of member states have still not increased their defense budgets to meet a goal of spending at least 2% of their annual economic output on defense by 2024.

Of NATO’s 29 members, just six meet that target this year: the US, Greece, Estonia, the UK, Romania and Poland.

At a news conference after the first meetings of leaders at the summit, Jens Stoltenberg insisted that more united NATO than divided it.

“We have had discussions, we do have disagreements, but most importantly we have decisions that are pushing this alliance forward and making us stronger.

“In the history of NATO we have had many disagreements and we have been able to overcome them again and again, because at the end of the day we all agree that North America and Europe are safer together.”

All 29 NATO members released a declaration which reaffirmed a commitment to increase military spending.

The communiqué also condemned “Russian aggression”, including the annexation of Crimea, the use of a nerve agent in southern England and “election interference”.