President Trump’s eldest son, Donald Trump Jr., has released private Twitter correspondence with WikiLeaks after a publication revealed they had communicated shortly before his father’s election.

The congressional investigation is one of several looking into allegations of Russian collusion and meddling in the US election.

The largely one-sided transcripts show the president’s son replied only a few times to a series of requests from Wikileaks.

In a series of tweets on November 13, Donald Trump Jr. played down his contact with WikiLeaks, referring to his “whopping 3 responses” which he said one of the congressional committees “has chosen to selectively leak. How ironic!”. 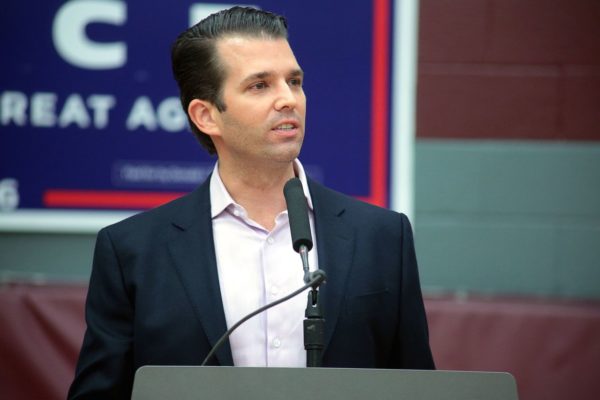 Messages show WikiLeaks appeared to have first contacted Donald Trump Jr. on September 20, asking if he knew the origin of an anti-Trump website.

Donald Trump son replied the next day saying: “Off the record I don’t know who that is, but I’ll ask around. Thanks.”

The correspondence between September 2016 and July 2017 shows WikiLeaks urging Donald Trump to share their Clinton files; asking him to supply his tax returns to WikiLeaks and advising him to challenge the result if he lost the election.

The Atlantic piece points out that while Donald Trump Jr. didn’t reply to later messages, timestamps from tweets show instances where he and his father appear to have “acted on its requests” by mentioning or sharing WikiLeaks stories shortly afterwards.

Julian Assange accuses it of selecting messages that were “edited” and failing to show the full context of the conversations.

He also said the messages were part of the group’s promotional efforts.

He wrote on Twitter: “WikiLeaks can be very effective at convincing even high-profile people that it is their interest to promote links to its publications.”

Donald Trump Jr.’s lawyer Alan Futerfas told The Atlantic: “Over the last several months, we have worked co-operatively with each of the committees and have voluntarily turned over thousands of documents in response to their requests.

“Putting aside the question as to why or by whom such documents, provided to Congress under promises of confidentiality, have been selectively leaked, we can say with confidence that we have no concerns about these documents and any questions raised about them have been easily answered in the appropriate forum.”