Louis CK’s I Love You, Daddy premiere has been canceled hours before the screening as five women leveled inappropriate behavior allegations against the comedian.

The movie distributor said it was reviewing plans for its general release.

Four comediennes – Dana Min Goodman, Julia Wolov, Rebecca Corry and Abby Schachner – and a fifth woman who spoke on condition of anonymity made allegations about the entertainer in November 9 edition of New York Times.

Dana Min Goodman and Julia Wolov said Louis CK had an inappropriate behavior after inviting them to his hotel room during the Comedy Arts Festival in Aspen, Colorado, in 2002.

Rebecca Corry told the newspaper that the comic was a guest star on a TV pilot she was appearing on in 2005 when he asked if he could go to her dressing room.

She said she rebuked him and pointed out that he had a daughter and a pregnant wife.

Abby Schachner has accused Louis CK of inappropriate behavior during a phone conversation in 2003.

“I felt very ashamed,” she told the New York Times.

A fifth woman, who did not want to be named, told the publication of alleged incidents involving Louis CK in the late 1990s while she was working in production on The Chris Rock Show.

I Love You, Daddy was written and directed by Louis CK, who also stars in the movie as a father who tries to stop his 17-year-old daughter (Chloe Grace Moretz) from having a relationship with a seedy 68-year-old film director (John Malkovich). 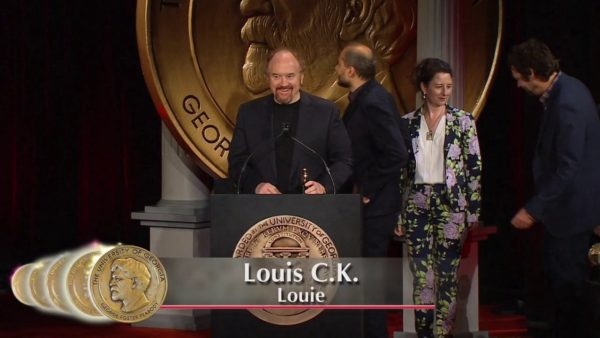 The movie’s distributor has not confirmed that it will go ahead with its release date in cinemas on November 17.

The Orchard has issued a statement to industry publications, saying: “In light of the allegations considering Louis CK references in today’s New York Times, we are cancelling tonight’s premiere of I Love You, Daddy.

“There is never a place for the behavior detailed in these allegations.

“As a result, we are giving careful consideration to the timing and release of the film and continuing to review the situation.”

Louis CK’s planned appearance on The Late Show with Stephen Colbert has also been canceled.

On November 9, HBO announced it would purge Louis CK’s past projects from its On Demand service.

HBO also said Louis CK would no longer participate in a charity comedy special, Night of Too Many Stars, later this month.

Two months ago, at the Toronto film festival, where I Love You, Daddy, was shown, the New York Times said it had asked Louis CK about claims of misconduct against him.

The divorced father of two daughters dismissed the reports as “rumors”.

Louis CK joins a growing list of Hollywood figures including Harvey Weinstein, Kevin Spacey, Brett Ratner and James Toback who have been engulfed by such allegations.

On November 9, a Los Angeles County district attorney Jackie Lacey announced a task force of prosecutors to address “the widespread allegations of abuse in entertainment industry”.