Duck Dynasty’s Korie Robertson claims that she and her family were targeted by white supremacists over their adopted biracial son.

Korie Robertson and her husband, Willie Robertson, adopted their son Will when he was just five weeks old. They have become proponents of adoption and previously told People magazine that their son being biracial hasn’t come up in the way they raise him, only in how the public looks at them.

“Here’s the thing: when we look at him, we don’t see an adopted kid. It doesn’t even cross our minds,” Willie Robertson told People magazine.

“He’s as much ours as our biological children.” 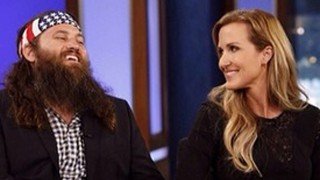 Willie and Korie Robertson star in God’s Not Dead

Are Willie and Korie Robertson planning to leave Duck Dynasty?

Korie Robertson has become an outspoken voice for racial healing in the US.

She first made a name for herself on the topic of race relations after an emotional interview with CNN in which she called for President Donald Trump to call out white supremacists in the wake of the Charlottesville protests.

Korie Robertson furthered this narrative while speaking to CBN News where she revealed that, as her family’s star rose, so too did the danger from racism.

“When our family hit mainstream and all the sudden all of America’s watching, they noticed our son’s biracial and we got comments and we got hate and negativity and we were actually targeted by white supremacists at one point. So it’s just shocking and scary and sad to know that that still exists in our country.”