Bloodhound SSC, the British car designed to go 1,000mph, will make its first public runs in the UK.

The car is conducting initial “slow-speed” trials and should get up to about 200mph on the runway at Newquay Airport.

This will take place on a special track that has been prepared on a dried-out lakebed in Northern Cape, South Africa.

It is exactly 20 years since the RAF man drove the jet-powered Thrust SSC vehicle through the sound barrier in the American Nevada desert to register a speed of 763mph. 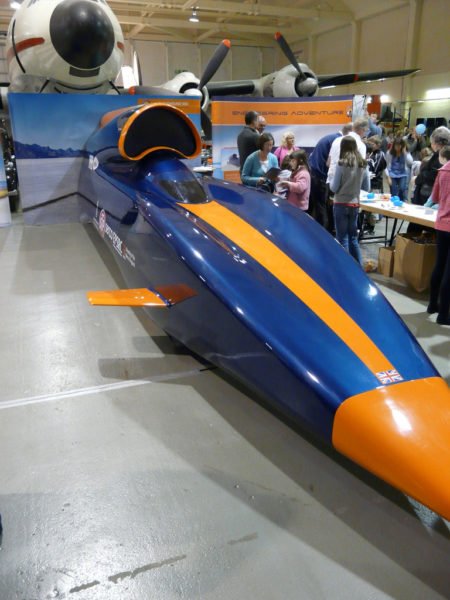 World’s fastest lawnmower to be built by Honda

Bloodhound benefits from two decades of technological improvement and will have the assistance not only of a state-of-the-art Eurofighter-Typhoon jet engine but the thrust of a rocket motor.

It seeks in the first instance to push the existing record above 800mph, but then ultimately to reach a speed that no-one is ever again likely to want to try to match.

The sleek, arrow-shaped car has taken some 9 years to develop and still awaits its Norwegian rocket motor.

The shortness of Newquay’s runway (1.7 miles) severely limits the speed Bloodhound can attain before it needs to brake and safely stop. However, the thousands of ticketed spectators should still get a good sense of the car’s potential.

Along with the absence of the rocket motor, the other big difference from the race set-up of Bloodhound is the wheels. These will be thin, rubber-shod discs; the tires are actually refurbished Dunlops from 1960s-era English Electric Lightning jet fighters.