The International Campaign to Abolish Nuclear Weapons (ICAN) has been awarded the 2017 Nobel Peace Prize.

The Geneva-based group was formed in 2007 and inspired by a similar campaign to ban the use of landmines.

As a coalition of hundreds of NGOs from across the world, they have highlighted the humanitarian risk of nuclear weapons.

The group’s 10 years of advocacy helped pave the way for the introduction of a UN treaty banning the weapons, which was signed this year.

While 122 countries backed the treaty, the talks were notably boycotted by the world’s nine known nuclear powers and the only NATO member to discuss it, the Netherlands, voted against.

Berit Reiss-Andersen, the Nobel committee chair, said: “We live in a world where the risk of nuclear weapons being used is greater than it has been for a long time.” 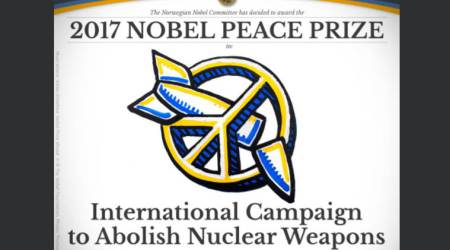 Tensions between President Donald Trump and North Korea have been mounting for several months over North Korea’s nuclear ambitions.

President Trump is also threatening to withdraw from an agreement which monitors and limits Iran’s nuclear development.

In a statement posted on Facebook, ICAN said the prize “shines a needed light on the path the ban treaty provides towards a world free of nuclear weapons”.

“This is a time of great global tension, when fiery rhetoric could all too easily lead us, inexorably, to unspeakable horror,” the statement read.

“If ever there were a moment for nations to declare their unequivocal opposition to nuclear weapons, that moment is now.”

The number of nuclear weapons worldwide has been steadily decreasing since the 1980s, but none of the world’s nuclear powers have fully disarmed – an ambition set out in the 1970 Treaty on the Non-Proliferation of Nuclear Weapons (NPT).

Nuclear armed nations boycotted the latest talks because they favor working within the NPT’s original framework to reduce stockpiles.

Unlike the NPT, the 2017 treaty explicitly bans nuclear weapons. It calls for signatories not to develop, test or threaten to use the weapons. It also forbids nations from having weapons tactically stationed in their countries from allied partners.

However, so far it has only been acceded to by 53 of the world’s countries including Cuba, Ireland and New Zealand.