President Donald Trump has lashed out at Puerto Rico officials over their criticism of US relief efforts on the island following Hurricane Maria.

Hurricane Maria a week ago killed 16 people in Puerto Rico and left millions in need of aid.

In a series of tweets, President Trump said that Puerto Rican officials showed “poor leadership ability” and “want everything to be done for them”.

His comments come after the Mayor of San Juan made a desperate plea for federal help.

In a news conference, Mayor Carmen Yulin Cruz said: “We have no time for patience any more.

“I am asking the president of the United States to make sure somebody is in charge that is up to the task of saving lives.

The mayor then appeared in a T-shirt that said “Help us, we’re dying” for a CNN interview.

Carmen Yulin Cruz, who is living in a shelter after her home was destroyed, said Puerto Rico is set to be without power for six to eight months after the storm damaged 90% of homes on the island.

More bad weather is in the offing, with the National Weather Service in San Juan warning that a strong thunderstorm would imminently affect the east of the island, with torrential rain and strong winds expected.

Almost half Puerto Rico’s 3.4 million-population is without drinking water, the Defense Department said on September 28.

Efforts are being made on the island to clear road access and restore hospitals to working conditions. 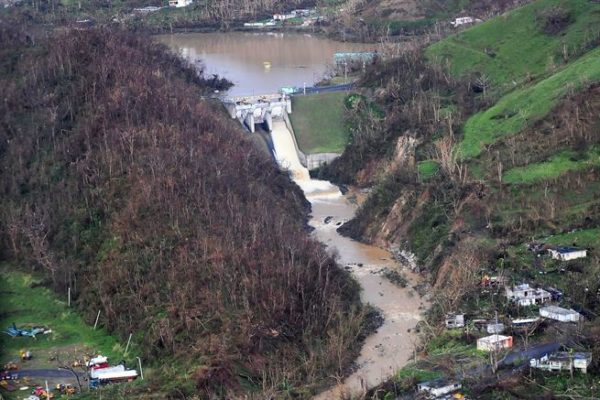 In a series of tweets on September 30, President Trump suggested the mayor had been told “to be nasty to Trump” by his Democratic opposition.

The president also said he would visit Puerto Rico on October 3 with First Lady Melania.

The visit comes after widespread criticism of his administration’s response to the hurricane.

Responding to President Trump’s tweets in an interview, Carmen Yulin Cruz said: “I was asking for help. I wasn’t saying anything nasty about the president.

The US military general in charge of the relief operation said on September 29 that about 4,500 troops were already involved.

The Federal Emergency Management Agency (FEMA) said 95% of Puerto Rico remained without power and 55% of people did not yet have access to drinking water, but that most petrol stations had reopened.

Concerns were raised on September 28 that thousands of shipping containers of aid were sitting in a San Juan undistributed. Ground transportation has been hindered by a lack of fuel and blocked roads.

The US navy has deployed a hospital ship and has assigned engineers to repair the island’s damaged power grid, the Department of Defense said on September 29.

Puerto Rico is a US territory but does not have direct voting representation.