Commemorations took place around the world on November 11 to mark the centenary of the Armistice that ended WWI.

President Donald Trump and Russian counterpart, Vladimir Putin, were among those who attended a service beneath the Arc de Triomphe in Paris, France.

About 70 world leaders gathered in Paris on November 11 for remembrance events.

French President Emmanuel Macron led the main event of the centenary – a somber commemoration at the Tomb of the Unknown Soldier, a memorial to France’s fallen under the Arc de Triomphe in Paris. 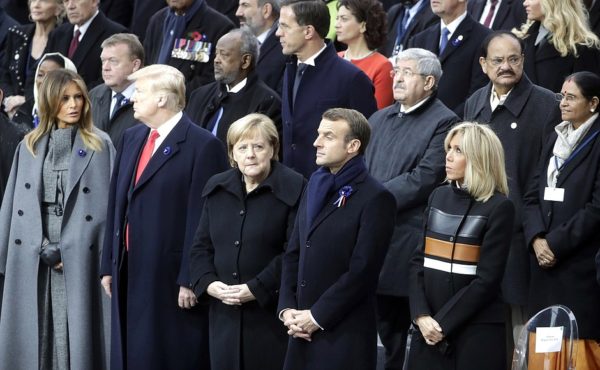 On November 10, Emmanuel Macron and Angela Merkel visited the town of Compiègne in northern France. They signed a book of remembrance in a railway carriage identical to the one in which the 1918 Armistice was sealed.

President Donald Trump caused controversy by canceling a trip to a cemetery for the war dead because of bad weather.

A group of around 50 activist organizations held a demonstration in Paris in protest against President Trump’s visit.

World leaders and royals have gathered for ceremonies marking 100 years since Britain joined World War One.

Prince Charles and UK’s PM David Cameron attended a service in Glasgow, while Prince William and Kate Middleton are in Belgium with many heads of state.

At the Liege ceremony, Prince William paid tribute to the soldiers who “died to give us our freedom”.

The day concludes with a candle-lit vigil at Westminster Abbey and a “lights out” event around the UK.

The public can join the switch-off ending at 23:00 – the time Britain declared war on Germany in 1914. About 17 million soldiers and civilians were killed between 1914 and 1918.

The day’s events began in Liege, Belgium, where 50 heads of state gathered for a service to mark the invasion of Belgium.

French President Francois Hollande said Belgium had been the first battleground of WWI and had offered “solid resistance” in Liege.

Speaking to the gathered European leaders, Prince William said: “We were enemies more than once in the last century and today we are friends and allies.

“We salute those who died to give us our freedom. We will remember them.”

Prince Harry unveiled a memorial arch in Folkestone, Kent – where a parade followed the route taken by millions of soldiers who marched to the harbor to begin their voyage to France in WWI.

French President Francois Hollande and German President Joachim Gauck will commemorate the 100th anniversary of Germany’s declaration of war on France on August 3, 1914.

Francois Hollande and Joachim Gauck will make a joint tribute in Alsace to soldiers killed during World War One.

They will also lay the first stone for a memorial at Vieil Armand cemetery. French President Francois Hollande and German President Joachim Gauck will commemorate the 100th anniversary of Germany’s declaration of war on France on August 3, 1914

On Monday events will be held in Belgium to mark Britain’s declaration of war on Germany.

Some 30,000 men were killed in the mountains around Vieil Armand, known in German as Hartmannswillerkopf.

The cemetery there contains the remains of 12,000 unidentified soldiers.

Francois Hollande and Joachim Gauck will pay tribute to the sacrifice those men made and celebrate the importance of the modern Franco-German relationship in Europe.

They will lay the foundation stone for a Great War memorial and exhibition centre on the site, which is due to open its doors to the public in 2017.

Francois Hollande and Joachim Gauck will meet again on Monday in the Belgian city of Liege, where heads of state from across Europe will mark the escalation of the war after Germany invaded Belgium.