Home Tags Posts tagged with "russian spy in us"

russian spy in us

A 29-year-old Russian woman has been charged in the US with conspiracy to act as a Russian government agent while infiltrating political groups.

According to media reports, Maria Butina had developed close ties with the GOP and had become an advocate for gun rights.

The charges are not related to Robert Mueller investigation that is examining alleged Russian meddling in the 2016 election.

Maria Butina allegedly worked at the direction of a high-level Kremlin official.

Her attorney, Robert Driscoll said in a statement released on July 16 that his client was “not an agent” and instead just an international relations student “who is seeking to use her degree to pursue a career in business”.

Robert Driscoll added the charges were “overblown” and there was “no indication of Maria Butina seeking to influence or undermine any specific policy or law or the United States”.

He said his client had “been co-operating with various government entities for months” over the allegations.

Maria Butina, who lives in Washington, was arrested on July 15 and was held in jail pending a hearing set for July 18, the DOJ said in a statement.

The announcement of Maria Butina’s arrest came hours after President Donald Trump met Russian President Vladimir Putin, and defended the Kremlin against claims of interference in the 2016 presidential election.

President Trump said there had been no reason for Russia to meddle in the vote.

In a sworn statement unsealed on July 16, FBI Special Agent Kevin Helson said Maria Butina’s assignment was to “exploit personal connections with US persons having influence in American politics in an effort to advance the interests of the Russian Federation”.

Maria Butina did so without registering her activities with the US government, as required under the Foreign Agent Registration Act, prosecutors say.

She sought to foster ties with an “organization promoting gun rights”, the DOJ said, without naming any group or politicians.

According to an affidavit, Maria Butina was trying to “establish a <<back channel>> communication for representatives of the Government of Russia”.

The criminal complaint states that Maria Butina focused on developing personal connections with influential US politicians to “advance the interest” of Russia. 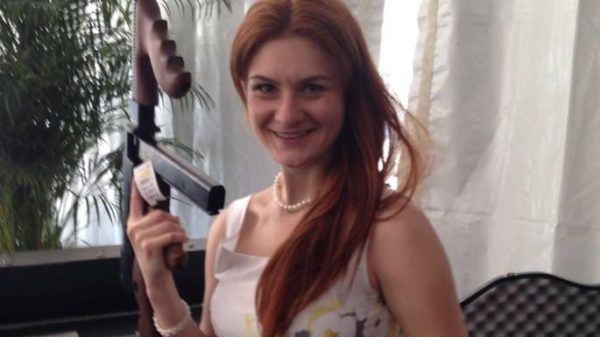 As a part of that alleged mission, the complaint says she was organizing an event to further influence “the views of US officials as those views relate to the Russian Federation”.

According to the complaint, Maria Butina reported back to an official in the Russian government about her progress using Twitter direct messages among other means.

In one message, the Russian official told her: “Your political star has risen in the sky. Now it is important to rise to the zenith and not burn out (fall) prematurely.”

The affidavit also states that the unnamed official was sanctioned by the US Treasury.

Maria Butina, originally from Siberia, came to the US on a student visa to study at American University. The complaint alleges that she was in fact secretly working for the Russian government.

The woman founded a group called the Right to Bear Arms before she arrived in America, and US media have previously reported her ties to the National Rifle Association (NRA), the most powerful gun lobby in the US.

Maria Butina has previously denied having worked for the Russian government.

The Washington Post reported that she became an assistant to Russian banker and former senator Alexander Torshin. He was sanctioned by the US Treasury in April.

Alexander Torshin, who is a lifetime member of the NRA, and Maria Butina attended NRA events in the US beginning in 2014.

According to the Washington Post, Donald Trump had answered: “We get along with Putin.”