President Donald Trump has visited the synagogue in Pittsburgh, where 11 Jewish worshippers were shot dead on October 27.

The president was joined by the First Lady, his daughter and son-in-law at the Tree of Life temple in Pittsburgh.

Meanwhile, hundreds of protesters gathered on the street chanting slogans against President Trump.

The visit came as mourners attended the first funerals for victims of the massacre.

The Trumps were greeted on October 30 by Rabbi Jeffrey Myers, who led them inside the temple, where the worst anti-Semitic attack in US history unfolded on October 27.

At a memorial outside, Melania Trump placed a flower and the president laid a small stone on a marker for each of the victims.

President Trump was joined by his son-in-law Jared Kushner, who is Jewish, and his daughter Ivanka, who converted to Judaism when she married Jared Kushner. Both are White House advisers.

Before his visit, President Trump condemned anti-Semitism. The alleged gunman was not a Trump supporter.

Critics accuse President Trump of fomenting a surge in white nationalist and neo-Nazi activity through divisive rhetoric which has seen him criticize immigrants and Muslims in particular.

More than 70,000 people signed an open letter from Pittsburgh-based Jewish leaders saying that President Donald Trump was “not welcome” in the city unless he “fully denounces white nationalism”.

The White House has rejected any blame over the attack.

According to Reuters, members of Pittsburgh’s Jewish community were among about 2,000 demonstrators who held a protest.

As President Trump arrived at the synagogue, demonstrators chanted “President Hate, leave our state” and “Words have meaning”. 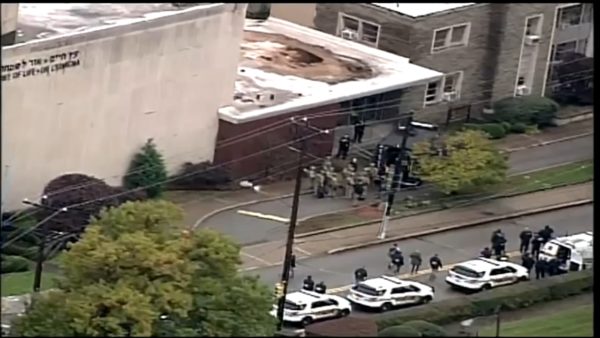