The US has become the first nation in the world to formally withdraw from the Paris climate agreement.

President Donald Trump announced the move in June 2017, but UN regulations meant that his decision only takes effect today, the day after the US election.

The US could re-join it in future, should a president choose to do so.

The Paris deal was drafted in 2015 to strengthen the global response to the threat of climate change.

It aims to keep the global temperature rise this century well below 2C above pre-industrial levels and to pursue efforts to limit the temperature increase even further to 1.5C.

The delay is down to the complex rules that were built into the Paris agreement to cope with the possibility that a future US president might decide to withdraw the country from the deal.

Previous attempts to put together a global pact on climate change had foundered because of internal US politics.

The Clinton administration was unable to secure Senate backing for the Kyoto Protocol, agreed in 1997.

So in the run up to the Paris climate talks, President Barrack Obama’s negotiators wanted to ensure that it would take time for the US to get out if there was a change in leadership.

Even though the agreement was signed in December 2015, the treaty only came into force on November 4,2016, 30 days after at least 55 countries representing 55% of global emissions had ratified it.

No country could give notice to leave the agreement until three years had passed from the date of ratification.

Even then, a member state still had to serve a 12-month notice period on the UN.

So, despite President Trump’s announcement in June 2017, the US was only able to formally give notice to the UN in November last year. The time has elapsed and the US is now out.

While the US now represents around 15% of global greenhouse gas emissions, it remains the world’s biggest and most powerful economy.

So, when it becomes the only country to withdraw from a global solution to a global problem it raises questions of trust.

For the past three years, US negotiators have attended UN climate talks while the administration has tried to use these events to promote fossil fuels.

While on the campaign trail, Joe Biden said he would seek to re-join as soon as possible – if he was elected President.

Under the rules, all that is required is a month’s notice and the US should be back in the fold.

However, even if the US chose to re-enter the agreement, there would be consequences for being out – even for a few months.

President Trump made leaving Paris a key part of his election platform in 2016, tying it into his vision of a revitalized US with booming energy production, especially coal and oil.

Donald Trump’s perspective on the Paris agreement was that it was unfair to the US, leaving countries like India and China free to use fossil fuels while the US had to curb their carbon.

The US has notified the UN of its intention to leave the Paris Climate Change Agreement, as other countries express regret and disappointment at the move.

The notification begins a one-year process of exiting the global climate change accord, culminating the day after the 2020 US election.

According to the US government, the climate change deal puts an “unfair economic burden” on Americans.

The Paris Agreement brought together 188 nations to combat climate change.

There has been widespread international condemnation of the US move.

The accord, agreed in 2015, committed the US and 187 other countries to keeping rising global temperatures below 2C above pre-industrial levels and attempting to limit them even more, to a 1.5C rise.

The withdrawal decision – taken by President Donald Trump after he came to office in 2017 – made the US the world’s sole non-signatory and prompted high-level efforts by the EU to keep the agreement on track.

However, hundreds of local governments, businesses and organizations in the US have joined the We Are Still In movement, pledging to cut emissions and move to renewable energy.

The US issued its formal notification on the first day it was possible to do so.

President Trump had made withdrawing from the agreement one of his election campaign pledges but UN rules had meant it was not possible for the US to start the withdrawal process until November 4, 2019.

The withdrawal is still subject to the outcome of next year’s presidential election – if Donald Trump loses, the winner may decide to change course. 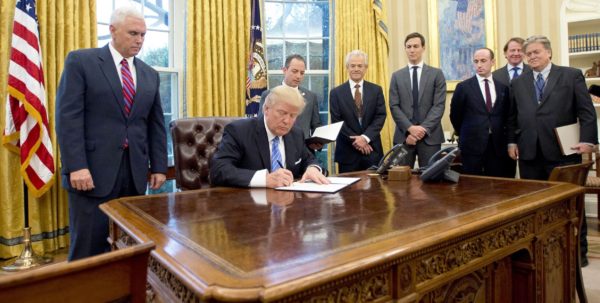 World’s leaders reacted to President Donald Trump’s announcement that the US is withdrawing from the 2015 Paris climate agreement.

UN chief Antonio Guterres’ spokesman called President Trump’s announcement “a major disappointment” while the EU said it was “a sad day for the world”.

However, senior Republicans and the US coal industry backed the move.

President Trump said the accord “punished” the US and would cost millions of American jobs.

In an address at the White House, the presdient said he was prepared to negotiate a new agreement or re-enter the accord on improved terms.

“I was elected to represent the citizens of Pittsburgh, not Paris,” Donald Trump said.

The Paris agreement commits the US and 187 other countries to keeping rising global temperatures “well below” 2C above pre-industrial levels and “endeavor to limit” them even more, to 1.5C.

Only Syria and Nicaragua did not sign up to the deal.

Donald Trump characterized the Paris agreement as a deal that aimed to hobble, disadvantage and impoverish the US.

He claimed the agreement would cost the US $3 trillion in lost GDP and 6.5 million jobs – while rival economies like China and India were treated more favorably.

President Trump said he was fulfilling his “solemn duty to protect America and its citizens”.

He added: “We don’t want other leaders and other countries laughing at us anymore – and they won’t be.”

Donald Trump did not give a timescale. However, under the agreement, a nation seeking to leave the pact can only give notice three years after the date it entered into force – November 16, 2016.

US payments to the UN Green Climate Fund, which helps developing countries cope with the effects of climate change, will stop.

Elon Musk said: “Climate change is real. Leaving Paris is not good for America or the world.”

However, Republican congressional leaders and the US coal industry backed the move, with Senate Majority Leader Mitch McConnell supporting President Trump “for dealing yet another significant blow to the Obama administration’s assault on domestic energy production and jobs”.

The US biggest coal mining company, Peabody Energy, said the agreement would have badly affected the US economy.

Senate Democratic leader Chuck Schumer called the decision “one of the worst policy moves made in the 21st Century because of the huge damage to our economy, our environment and our geopolitical standing”.

UK’s PM Theresa May, who expressed her disappointment and told President Trump in a phone call that the deal protects the “prosperity and security of future generations”.

French President Emmanuel Macron said he respected Donald Trump’s decision but believed it was a “mistake both for the US and for our planet”.

President Trump indicated he was open to another climate deal, saying he would “begin negotiations to re-enter either the Paris accord or a really entirely new transaction on terms that are fair to the United States”.

However, Donald Trump’s words suggested this was not a priority.

During Donald Trump’s election campaign he dismissed climate change as a “hoax”.

French, German and Italian leaders quickly issued a joint statement rejecting a renegotiation of the agreement.

The statement said: “We deem the momentum generated in Paris in December 2015 irreversible and we firmly believe that the Paris agreement cannot be renegotiated, since it is a vital instrument for our planet, societies and economies.”

President Emmanuel Macron reflected the defiance among the remaining signatories, saying “we are fully committed”.

Reworking one of Donald Trump’s own phrases, President Macron added: “Wherever we live, whoever we are, we all share the same responsibility: make our planet great again.”

The Chinese foreign ministry said the parties to the Paris accord “should cherish this hard-won outcome”.

Meanwhile, the Democratic governors of New York, California and Washington all quickly vowed to respect the terms of the Paris deal.