Air Force Gen. John Hyten, the top nuclear commander in the US, says he would resist any “illegal” presidential order to launch a strike.

He said as head of the US Strategic Command he provided advice to a president and expected that a legal alternative would be found.

Some of them expressed concern that President Donald Trump might irresponsibly order such a strike.

Others though said a president must have the authority to act without meddling from lawyers. It was the first such hearing in more than 40 years.

Three months ago, President Trump vowed to unleash “fire and fury like the world has never seen” on North Korea if it threatened the US. 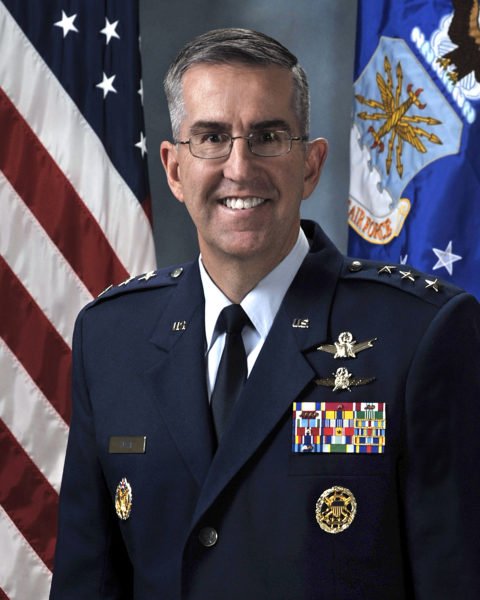 Speaking at the Halifax International Security Forum in Canada, Gen. John Hyten said: “We think about these things a lot. When you have this responsibility, how do you not think about it?”

As for the legality of a strike, Gen. Hyten said that he had studied US laws of armed conflict for many years which stipulates key criteria the president must consider:

While Senators and expert witnesses agree the US president has full authority to defend the nation, commentators have pointed out that because there is no all-encompassing definition of “imminent attack”, the president is not given an entirely free hand.

Gen. John Hyten also said: “I provide advice to the president, he will tell me what to do.

“And if it’s illegal, guess what’s going to happen? I’m going to say: <<Mr. President, that’s illegal>>. And guess what he’s going to do? He’s going to say, <<What would be legal?>> And we’ll come up with options, of a mix of capabilities to respond to whatever the situation is, and that’s the way it works.”

He added: “If you execute an unlawful order, you will go to jail. You could go to jail for the rest of your life.” North Korea has announced today that its army had received final approval to launch “merciless” nuclear strikes against the US.

The General Staff of the Korean People’s Army said it was formally notifying Washington that US threats would be “smashed by… cutting-edge smaller, lighter and diversified nuclear strike means”, according to a statement published by the official KCNA news agency.

“The merciless operation of [our] revolutionary armed forces in this regard has been finally examined and ratified.

“The moment of explosion is approaching fast,” the statement read, adding that it could occur “today or tomorrow”.

The North Korean move came just hours after Defense Secretary Chuck Hagel said North Korea presented a “clear and present danger” to the US and its allies after days of escalating rhetoric.

Hawaii and Guam would also be outside the range of its medium-range missiles, but the US bases in South Korea and Japan may be vulnerable.

Chuck Hagel issued a statement after US stealth bombers were seen patrolling the border between North Korea and South Korea as part of military exercises which have inflamed tensions in the region.

Despite a successful long-range rocket launch in December, it is believed North Korea is years from developing an inter-continental ballistic missile that could strike the mainland United States, AFP reported.

Chinese troops have been placed on a heightened state of alert along the country’s frontier with North Korea after a series of warlike statements and actions from the pariah state.

North Korea today blocked South Korean workers from entering jointly run Kaesong Industrial Complex which is one of the few signs of positive relations between the neighboring countries.

The move to bar South Koreans from going to work at the Kaesong factory zone comes a day after North Korea announced that it would re-open a nuclear facility which has been closed since 2007.

North Korea has declared “state of war” against South Korea in its latest escalation of rhetoric against its neighbour and the US.

A statement promised “stern physical actions” against “any provocative act”.

North Korea has threatened attacks almost daily after it was sanctioned for a third nuclear test in February. However, few think the North would risk full-blown conflict, and the two sides have technically been at war since 1953 as no peace treaty has been signed.

An armistice at the end of the Korean War was never turned into a full treaty.

North Korea carried out its third nuclear test on February 12, which led to the imposition of fresh sanctions.

Many analysts believe that all-out war with South Korea and its ally the United States would be suicidal for the North, says the BBC’s Lucy Williamson in Seoul.

But with both sides threatening heavy retaliation, there’s a chance of minor incidents escalating, our correspondent adds.

A North Korean statement released on Saturday said: “From this time on, the North-South relations will be entering the state of war and all issues raised between the North and the South will be handled accordingly.

“The long-standing situation of the Korean peninsula being neither at peace nor at war is finally over.”

In Washington, Caitlin Hayden, a spokeswoman for the National Security Council, said the US had “seen reports of a new and unconstructive statement from North Korea”.

“We take these threats seriously and remain in close contact with our South Korean allies,” she said.

On Thursday, North Korean state media reported leader Kim Jong-un “judged the time has come to settle accounts with the US imperialists”.

Kim Jong un was said to have condemned US B-2 bomber sorties over South Korea during military exercises as a “reckless phase” that represented an “ultimatum that they will ignite a nuclear war at any cost on the Korean peninsula”.

North Korea’s most advanced missiles are thought to be able to reach Alaska, but not the rest of the US mainland.

China, North Korea’s biggest trading partner, has reiterated its call for all sides to ease tensions.

Foreign ministry spokesman Hong Lei told a daily news conference that “joint efforts” should be made to turn around a “tense situation”.

Russian Foreign Minister Lavrov went further, voicing concern that “we may simply let the situation slip out of our control”.

“We are concerned that… unilateral action is being taken around North Korea that is increasing military activity,” he said.

On March 16, North Korea warned of attacks against South Korea’s border islands, and advised residents to leave the islands.