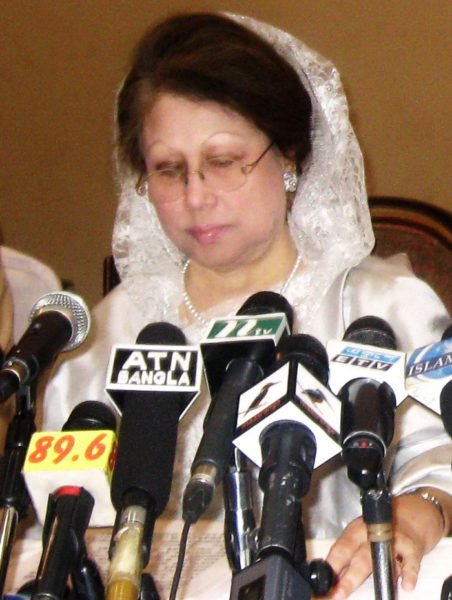 Bangladeshi opposition activists and police clashed as the country is holding a general election boycotted by the opposition.

At least three people were killed in unrest on Sunday. Scores have died in the run-up to the polls.

Dozens of polling stations have been torched and voting is suspended at more than 100. Polling is said to be thin.

The opposition is boycotting the vote with a two-day strike against what it called a “scandalous farce”.

PM Sheikh Hasina’s Awami League is assured of victory, with government candidates already declared victors by default in many seats.

She rejected demands for her to step down and a neutral government to oversee the poll, as in previous years.

“The polls opened across the country at 08:00,” said election commission spokesman SM Asaduzzaman. Voting will continue until 16:00.

In more than half of constituencies there is no voting at all, because the opposition boycott has led to government candidates being declared winners in advance.

Bangladesh votes amid violence and boycott

In the opposition stronghold of Bogra, the police chief told AFP: “We’ve seen thousands of protesters attack polling booths and our personnel at a number of locations with Molotov cocktails and petrol bombs.”

Media reported that more than 100 polling stations were torched overnight – adding to a similar number the night before.

One polling station in Dhaka’s Mirpur district recorded only 25 ballots out of 24,000 registered voters in the first two hours, AP reported.

Security is tight, with some 50,000 troops reportedly deployed around the country for the election.

Given the arson attacks and attempts to steal ballot papers and despite the heavy police presence, voters are wary about how secure they would be in coming to the polling stations.

The opposition Bangladesh National Party (BNP) began a nationwide 48-hour strike on Saturday a day after its leader Khaleda Zia urged supporters to “completely boycott” what she called a “scandalous farce” of an election.

She accused the government of placing her under house arrest – something the authorities deny.

The strike is only the latest in a string of protests by the BNP and its allies – including the Islamist Jamaat-e-Islami party – that has seen a blockade of roads, railways and waterways and the closure of shops, schools and offices.

But the Awami League abolished the caretaker system in 2010, arguing that it was no longer necessary. It used its two-thirds majority in parliament to make the change.

The government has insisted that the BNP should take part in the polls within the existing constitutional framework. It says that the opposition should discuss any changes it wants after the vote.

Bangladesh’s main opposition party and its allies have decide to begin a three-day strike over the government’s failure to set up a caretaker cabinet in the run-up to the country’s general elections.

The Bangladesh Nationalist Party party (BNP), led by Khaleda Zia, is calling for the government to step aside ahead of the polls due in January.

The strike is going ahead despite pleas from PM Sheikh Hasina.

In comes after at least six people were killed during fresh unrest on Friday.

The violence flared as police and protesters clashed in some parts of the country, leaving more than 100 injured.

The strike began at 06:00, with the BNP and its Islamist ally the Jamaat-e-Islam hoping to bring the country to a standstill.

Three people were killed and dozens injured in Bangladesh Friday when security officials clashed with opposition supporters trying to defy a ban on protests, in Dhaka

They want to force the prime minister to allow a neutral caretaker administration to oversee the election process.

But Sheikh Hasina, who heads the Awami League, has rejected such a plan saying there is no scope for unelected people to supervise the vote.

Khaleda Zia announced that the national shutdown would be going ahead from Sunday, despite a rare phone call with Sheikh Hasina in which the the prime minister asked her to call off the strike.

It is thought to be the first time the bitter rivals have spoken directly for a decade.

The BNP and its allies are refusing to participate in elections under current constitutional provisions, which do not allows for a neutral, caretaker government, or require the incumbent prime minister to step down during the interim period.

The opposition fears the government will rig the polls if it remains in power.

Two people were killed in the coastal district of Cox’s Bazar, according to reports.

Demonstrators set vehicles on fire in the capital Dhaka.

A series of rulings against Jamaat have led to violent protests across Bangladesh, with more than 150 people killed in clashes with police since the beginning of this year.