North Korea has threatened to pull out of a summit with President Donald Trump if the US insists it gives up its nuclear weapons.

The highly anticipated meeting between President Trump and North Korean leader Kim Jong-un is due to take place on June 12.

However, in an angry statement, North Korea’s vice-foreign minister accused the US of making reckless statements and of harboring sinister intentions.

He said: “We do not hide our feeling of repugnance towards him.”

The groundbreaking agreement for Kim Jong-un and Donald Trump to meet came about as North Korea said it was committed to denuclearizing the Korean peninsula.

Exactly what that would entail has remained unclear, but North Korea has invited foreign media to witness the dismantling of its main nuclear test site later this month.

John Bolton recently said North Korea could follow a “Libya model” of verifiable denuclearization, but this alarms Pyongyang, which watched Libya’s Colonel Gaddafi give up his nuclear program only for him to be killed by Western-backed rebels a few years later.

Kim Kye-gwan’s statement, carried by North Korea’s state media, said that if the US “corners us and unilaterally demands we give up nuclear weapons we will no longer have an interest in talks” and “will have to reconsider” attending the June 12 summit in Singapore.

The official said North Korea did have “high hopes” but that it was “very unfortunate that the US is provoking us ahead of the summit by spitting out ludicrous statements”.

He is known to be highly respected in the North Korean leadership and has taken part in negotiations with the US before. There is very little chance Kim Kye-gwan;s comments were not personally endorsed by Kim Jong-un.

Hours before the announcement, in a sign of growing problems, Pyongyang has also pulled out of a meeting scheduled with South Korea on May 16 because of anger over the start of US-South Korean joint military drills.

Pyonyang had earlier said it would allow them to go ahead, but then called them “a provocative military ruckus” which was undermining its diplomatic efforts.

The sudden change in tone from North Korea is said to have taken US officials by surprise. Analysts said Pyongyang could be trying to strengthen its hand before talks.

The US state department said it was continuing to plan the Trump-Kim meeting, and President Trump is yet to comment.

The president tweeted to thank General H.R. McMaster, saying he had done an “outstanding job & will always remain my friend”.

John Bolton, who has backed attacking North Korea and Iran, told Fox News his job would be to ensure the president has “the full range of options”.

H.R. McMaster is the latest high-profile departure from the White House.

John Bolton’s appointment does not require US Senate confirmation. He will take the job on April 9.

The National Security Adviser is the key counselor to the president on national security and foreign policy issues, and acts as a conduit for policy proposals coming from various government departments, including defense and state.

John Bolton, 69, said he was looking forward to working with President Trump and his team “to make our country safer at home and stronger abroad”.

He has been a foreign policy hawk in Republican circles for decades, having served in the administrations of Ronald Reagan, George H.W. Bush and George W. Bush. 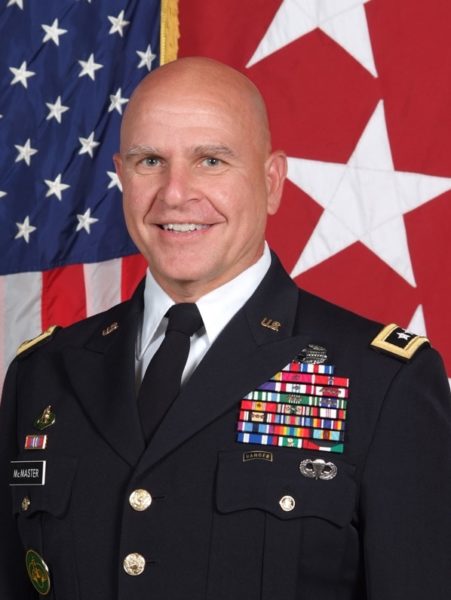 President George W. Bush appointed John Bolton as US envoy to the UN, during which time diplomats privately criticized his style as abrasive.

A strident neo-conservative, John Bolton helped build the case that Saddam Hussein possessed weapons of mass destruction, which turned out to be wrong.

Known for his walrus moustache, John Bolton does not appear to have greatly moderated his views since his last spell in government.

John Bolton stands by the invasion of Iraq and has advocated in newspaper op-eds using military force against North Korea and Iran.

In a brief statement on March 22, General H.R. McMaster, 55, thanked President Trump for appointing him and said he was applying to retire from the US Army later this year.

The three-star general is leaving after just over a year as national security adviser.

The White House said President Trump and H.R. McMaster had “mutually agreed” that he would leave. He had been rumored for weeks to be on his way out.

His departure came a day after someone at the White House leaked to media that President Trump was advised this week in briefing documents not to congratulate Russian President Vladimir Putin on his recent re-election, but did it anyway.

General H.R. McMaster replaced Lt. Gen. Michael Flynn, who was fired after less than a month in the job for misleading the White House about his contacts with the Russian ambassador.

Rex Tillerson, 64, has met the president-elect amid growing speculation that he is being considered for secretary of state.

NBC News quotes sources close to Donald Trump as saying that Rex Tillerson is likely to be named next week.

The news comes as Donald Trump’s team challenged the accuracy of intelligence reports that Russia intervened to boost his election prospects.

Veteran Republican Mitt Romney is among others who have also been linked to the role of secretary of state.

He has been a critic of the international sanctions against Russia for annexing Crimea.

In a statement, Donald Trump’s transition team said the officials making the assessment were “the same people that said Saddam Hussein had weapons of mass destruction”.

Spokesman Sean Spicer said there were “people within these agencies who are upset with the outcome of the election”.