Natassia Malthe has accused Harvey Weinstein of raping her in a London hotel room after the 2008 BAFTA awards ceremony.

The Norwegian actress and model told a press conference in New York she met Harvey Weinstein at an after party and felt pressured into telling him she was staying at the Sanderson Hotel.

Natassia Malthe alleges Harvey Weinstein banged on her door, she let him in and he raped her.

The movie mogul has previously issued a statement saying he denies all allegations of non-consensual contacts.

Natassia Malthe, who has appeared in movies including This Means War alongside Reese Witherspoon, Tom Hardy and Chris Pine, said she was asleep when she was awoken by Harvey Weinstein’s “repeated pounding” on the door.

She said she received a script the next day and then returned to Los Angeles. Natassia Malthe said she was given the impression she had landed a role in the movie Nine, a film produced by Harvey Weinstein that would star Daniel Day-Lewis, Nicole Kidman and Dame Judi Dench. 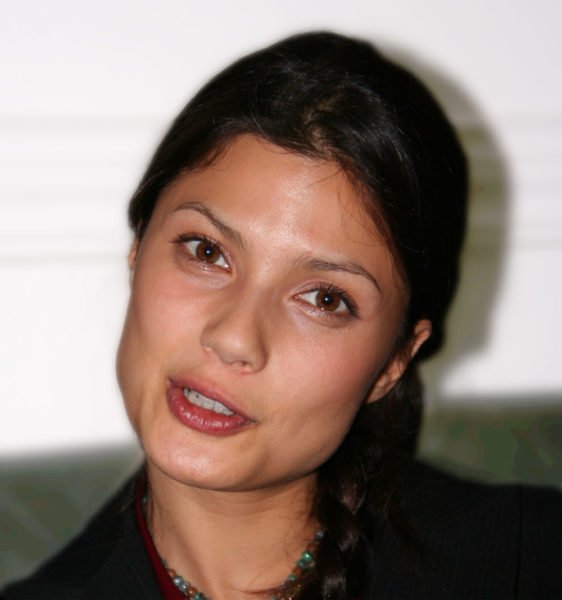 Natassia Malthe said Harvey Weinstein later asked her to meet him at the Beverly Hills Peninsula Hotel, telling her an assistant would be present.

However, the actress said when she got there, he instead asked her to join him and another woman.

She says she refused and when she later called him to turn down a role in one of his movies, he became angry and verbally abusive.

Natassia Malthe’s lawyer, Gloria Allred, said the Norwegian actress is “considering” whether to make a report to police over the allegation.

The news comes the day after a former production assistant, Mimi Haleyi, also accused Harvey Weinstein of raping her in 2006.

Another actress and model, Dominique Huett, also said she was raped by Harvey Weinstein. She has now has become the first woman to sue The Weinstein Company, alleging a single count of negligence.

Dozens of women have made accusations against Harvey Weinstein this month, including rape and assault.

Harvey Weinstein’s former assistant Zelda Perkins says she was paid £125,000 ($165,200) to keep quiet after accusing the movie mogul of harassment.

She told the Financial Times she signed a non-disclosure agreement in 1998 after making the accusations.

Zelda Perkins said Harvey Weinstein asked her to give him massages and tried to pull her into bed, but she “was made to feel ashamed for disclosing his behavior”.

Harvey Weinstein, 65, has denied any allegations of non-consensual contacts.

Zelda Perkins said she reported her allegations after a female colleague told her she had also been harassed by the film producer.

The two women subsequently sought damages and were awarded a sum of £250,000 ($330,500), split equally, but also signed a non-disclosure agreement, prohibiting them from discussing the allegations.

By breaking the agreement, Zelda Perkins could be liable to repay the settlement, and potentially pay damages and other legal fees stipulated in the contract.

However, Zelda Perkins told the Financial Times: “I want to publicly break my non-disclosure agreement.

“Unless somebody does this there won’t be a debate about how egregious these agreements are and the amount of duress that victims are put under.”

Zelda Perkins claims that Harvey Weinstein would ask her to massage him while he was in his underwear, when they were alone in hotel rooms.

Her testimony is similar to that of a number of Hollywood actresses – Lupita Nyong’o and Gwyneth Paltrow both claimed Harvey Weinstein suggested a massage in his bedroom and hotel room respectively.

Zelda Perkins added that she often had to wake him up in the morning and “he would try to pull me into bed”.

Harvey Weinstein has apologized for the way he has “behaved with colleagues in the past” and acknowledged that his actions have “caused a lot of pain”.

However, the film producer has said many of the accusations against him are “patently false”, and in a statement to the FT, said he had “confirmed that there were never any acts of retaliation against any women for refusing his advances”.

Zelda Perkins is one of scores of accusers who have come forward after a New York Times investigation into Harvey Weinstein’s conduct.

Rose McGowan claimed that she reached a $100,000 settlement with Harvey Weinstein in 1997 after an alleged incident in a hotel room at the Sundance Film Festival.

The New York Times said a legal document confirming the settlement stipulated it was “not to be construed as an admission”, but intended to “avoid litigation and buy peace”.

Allegations against Harvey Weinstein are subject to criminal investigations in London, Los Angeles and New York.

New York prosecutors are investigating the Weinstein Company following allegations of assault made against its co-founder, Harvey Weinstein.

The civil rights inquiry seeks to identify employees who have been subject to harassment.

According to prosecutors, company documents will be seized as part of the investigation. These include documents relating to complaints about harassment and how such complaints were handled.

The Weinstein Company, which is based in New York, has come under intense pressure over the scandal and fired Harvey Weinstein from its board earlier this month.

More than two dozen women, including Angelina Jolie, Gwyneth Paltrow and Rose McGowan, have made a number of accusations against the film producer.

Harvey Weinstein, whose films have received more than 300 Oscar nominations, has “unequivocally denied” any allegations of non-consensual sex.

Officers are looking into claims they were attacked in Westminster, Camden and west London.

No arrests have been made over any of the allegations, police say.

In an interview with ABC News, the actor said: “I knew the story about Gwyneth [Paltrow] from Ben [Affleck], because he was with her after Brad [Pitt], so I knew that story.”

In the same interview George Clooney, whose big-screen break was a Weinstein film, said it is “beyond infuriating” that “predator” Harvey Weinstein was “out silencing women”.

On October 23, at a film premiere in Los Angeles, George Clooney spoke about the need to believe women who speak out about assault.

“Maybe this is the watershed moment, where we believe women, where they feel safe that they can talk about what they’re experiencing,” he said.

George Clooney and Matt Damon join the list of Hollywood stars who have spoken out to condemn Harvey Weinstein.

Harvey Weinstein has stepped down from his company’s board amid multiple allegations of assault and harassment, according to media reports.

The 65-year-old Hollywood producer was fired as chairman of The Weinstein Company last week when the allegations were first reported.

Harvey Weinstein stayed on the company’s board but has now resigned from that post, it was widely reported on October 17.

He insists all contacts he had were consensual.

According to Variety magazine, Harvey Weinstein, who has been expelled from the body behind the Oscar awards, still owns 22% of his company’s stock,.

The Weinstein Company, which was behind movies including The King’s Speech and The Artist, has come under intense pressure over the scandal.

The production company – co-founded by Harvey Weinstein – is in talks over a possible sale to private equity firm Canyon Capital.

Lexus is the latest business to distance itself from The Weinstein Company, saying on October 17 that it was evaluating their partnership.

Harvey Weinstein has been accused of rape, assault and harassment, but has “unequivocally denied” any allegations of non-consensual relationships.

Amid the fallout over the scandal, Roy Price, the head of Amazon Studios, also resigned on October 17 over allegations of harassment.

Roy Price took a “leave of absence” on October 12 after Isa Hackett, a producer on the Amazon series The Man in the High Castle, told the Hollywood Reporter he allegedly harassed her in 2015.