Nomadland’s Chloe Zhao made history as the first woman of color and second woman to win best director.

Anthony Hopkins, 83, is the oldest winner of best actor, while Daniel Kaluuya is the first black British actor to win an Oscar – for the best supporting award.

She won best original screenplay for Promising Young Woman, which she also directed.

The awards were handed out in one of the grand halls at Los Angeles’s stylish Union Station to allow for a Covid-safe ceremony, while many UK-based nominees were at a venue in London – although Anthony Hopkins was at neither.

Anthony Hopkins won best actor for his masterful performance as a man suffering with dementia in The Father, 29 years after he won his first Oscar for The Silence of the Lambs.

The actor’s victory was the biggest surprise of the night. The award had been tipped to go to the late Chadwick Boseman, who died at the age of 43 last August, for Ma Rainey’s Black Bottom.

It was perhaps a surprise to Sir Anthony himself, who was neither in LA nor at the British Film Institute in London, the ceremony’s UK venue.

Anthony Hopkins was thought to be in his native Wales, and there was not an option to appear via Zoom, meaning he did not appear on screen or in person.

Nomadland, the slow-burning drama about a woman living in her van in the American West after the financial crash, won the top prize for best film, plus best director and best actress.

Frances McDormand, who now has three best actress Oscars, is one of the only professional performers in the film. Most of the rest of the cast is made up of real people playing fictionalized versions of themselves.

In her acceptance speech, Chloe Zhao thanked the real-life nomads “for teaching us the power of resilience and hope”.

Before Chloe Zhao, the only woman to have won the directing prize in the Oscars’ 92-year history was Kathryn Bigelow for The Hurt Locker in 2010.

Meanwhile, black-and-white film Mank, which led the nominations with 10, picked up two awards, as did Sound of Metal, Judas and the Black Messiah, Ma Rainey’s Black Bottom and Soul.

The Shape of Water was the biggest winner at this year’s Academy Awards ceremony in Los Angeles with four Oscars, including best picture.

Frances McDormand won best actress for Three Billboards Outside Ebbing, Missouri, and persuaded every female nominee to stand with her in a night full of statements about inclusion.

In her acceptance speech, Frances McDormand put her Oscar on the floor in front of her and addressed executives as the female nominees got to their feet.

Her request came amid a push for greater equality in film – especially in the wake of the Hollywood harassment scandal.

Frances McDormand finished her speech with the words: “I have two words to leave you with tonight – inclusion rider.”

She received a rousing reception for her best actress win, which came for playing a vengeance-seeking mother who is let down by the authorities after her daughter is raped and murdered.

The ceremony also marked the Me Too and Time’s Up campaigns with a segment presented by Ashley Judd, Salma Hayek and Annabella Sciorra, who have all accused Harvey Weinstein of harassment or assault. 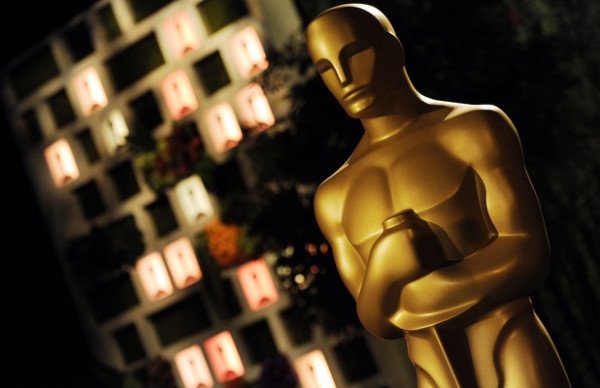 Host Jimmy Kimmel addressed the issue head-on in his opening monologue, saying the downfall of Harvey Weinstein, and the reforms that had begun since, had not come soon enough.

He said: “What happened with Harvey and what’s happening all over was long overdue.

“We can’t let bad behavior slide any more. The world is watching us.”

Accepting his first ever Oscar, Gary Oldman mentioned his 98-year-old mother, among other people, telling her: “Thank you for your love and support. Put the kettle on. I’m bringing Oscar home.”

Guillermo del Toro won best director for The Shape of Water, which stars Sally Hawkins as a mute cleaning lady who has a relationship with a mysterious river-dwelling creature. It led the Oscar race with 13 nominations.

Warren Beatty and Faye Dunaway, who announced the wrong best picture winner in 2017, returned to present the same award this time.

Get Out won best original screenplay for its writer-director Jordan Peele.

Jordan Peele is the first black winner of the award and hailed a “renaissance” moment in Hollywood.

Lady Bird and The Post were among the films that were left empty-handed.