Tens of thousands of protesters have demonstrated across the US over the Trump administration’s hard-line immigration policies.

More than 630 events were planned, with demonstrators calling for migrant families split at the US border to be reunited.

Some 2,000 children remain separated from their parents, despite President Donald Trump bowing to public outrage and curtailing the policy.

Concerns remain that records were not kept linking parents and children.

Major demonstrations took place in Washington DC, New York, and many other cities, using the hashtag #familiesbelongtogether. Protesters held placards calling for no more family separations and for the controversial immigration agency ICE to be abolished.

In Chicago, protesters marched to the local offices of federal immigration authorities. 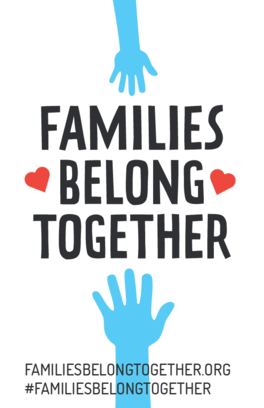 The original Trump administration “zero tolerance” policy required authorities to arrest and detain anyone crossing the Mexico-US border illegally. That meant separating children from their parents and holding them separately.

However, President Trump promised to “keep families together” in migrant detention centers.

But critics say the order did not address the issue of families already separated, leaving uncertainty over the fate of 2,342 children taken away from their parents between May 5 and June 9 alone. Earlier this week, a judge in California ordered the families to be reunited within 30 days.

It also still requires authorities to detain immigrant families, rather than release them with a court date to return.

Protests’ organizers said they wanted to send a message to President Trump, prompted by concerns that he would renege on his executive order.

As well as the reunification of parents and children, organizers called for an end to immigrant detention – even when families are kept together – and also planned to voice opposition to President Trump’s travel ban targeting five majority-Muslim nations, which was upheld by the Supreme Court earlier this week.

Protests were also likely to focus on the shake-up of the Supreme Court after Anthony Kennedy announced his retirement last week, giving President Trump the opportunity to solidify a conservative majority on the Supreme Court.

On June 30, President Trump defended the agency that played a central role in carrying out the separations – the Immigration and Customs Enforcement (ICE). The president told its employees: “You are doing a fantastic job of keeping us safe by eradicating the worst criminal elements. So brave!”

Protests’ organizers issued instructions for people to dress in white, to represent peace and unity. The main march is taking place in Washington DC, but one of the people behind the movement, Anna Galland, said separate events were planned in 50 states.

Lead organizers of the march include the American Civil Liberties Union, the Leadership Conference on Civil Rights and the National Domestic Workers Alliance.

A number of celebrities expressed their support, including Julianne Moore, America Ferrara and Natalie Portman, and Lin-Manuel Miranda, creator of the hit musical Hamilton.