France’s President Emmanuel Macron and the first lady are the center of allegations that the Élysée Palace is shelling out a fortune on a new dinner service while complaining about the scale of the welfare budget.

However, a leading satirical magazine says the real cost is nearer €500,000.

The claim surfaced as a video emerged of President Emmanuel Macron talking of “shedloads of cash” spent on benefits.

The video, posted on Twitter by Emmanuel Macron’s communications spokesman, went viral and prompted accusations of contempt for the poor, feeding into perceptions of a privileged president aloof from how the public live.

Some of the Élysée crockery dates back to Jacques Chirac’s time as president over a decade ago, and some even from René Coty’s time in the 1950s.

According to officials, the dinner service has to be replaced because it is getting old and is no longer complete. 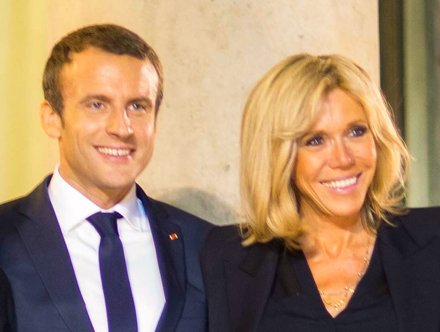 The Sèvres porcelain factory has historically supplied the Élysée with its ceramics since 1848. The Bleu Élysée design by Évariste Richer is a sketch of the presidential palace itself.

The Élysée said the bill for producing the 900 plates and 300 side plates came out of the factory’s annual budget. So the cost of €50,000 was for paying the artists involved in creating the design.

However, Le Canard enchaîné magazine calculated the real cost of hand-painting 1,200 plates was far higher, at least €400 a plate. That would be almost 10 times the official estimated cost.

Others have put the bill at closer to €200 a plate and pointed out that the factory is 60% funded by the culture ministry to the tune of €3.6 million a year. The head of the porcelain factory supervising the project said the price of the dinner service had not yet been worked out, but the bill would not be charged to the presidential palace.

Observers say the timing of the dinner revelations is awkward, after a video went viral showing President Macron talking about money in colloquial language.

In the video, circulated by his head of communications, Sibeth Ndiaye, Emmanuel Macron is heard saying in passionate terms: “Look where we are on welfare. We plough a shedload of cash into subsistence benefits, and people are still poor.

“They don’t get out. People who are born poor stay poor. We’ve got to have something that enables people to get out of it.”

President Macron later gave a speech in the southern city of Montpellier spelling out the need to review a benefit system that lacked humanity, paid out increasing amounts of in-work benefits and stigmatized recipients.

Commentators pointed to a remark made by the president last year when he accused opponents of his plans to reform French labor laws as “lazy”.