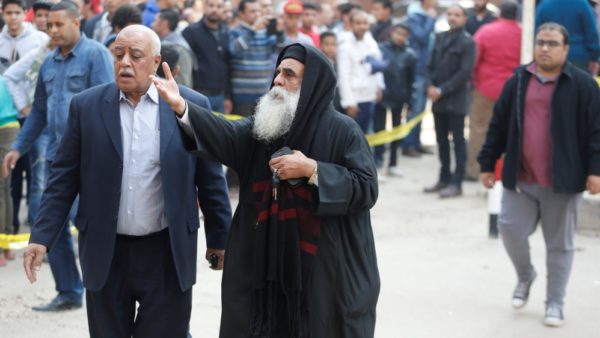 The restoration of Coptic Christian Church Virgin Mary in Cairo has been completed after 16 years.

Also known as the Hanging Church because it is seated above a 2nd Century Roman fortress, it was home to the Coptic pope until the 13th Century.

Christians make up about 10% of Egypt’s mainly Muslim population.

Many Christians were sympathetic to the overthrow of President Mohamed Morsi last year and dozens of churches were damaged in the ensuing violence.

President Abdel Fattah al-Sisi has called for Christians and Muslims to be united and is said to have a good relationship with Pope Tawadros.

Ibrahim Mahlab said the restoration, which cost more than $5 million, was delayed by engineering challenges posed by subterranean water courses.

He was taken on a tour of the church to learn more about the renovation process.

The church is in a compound close to Cairo’s first mosque and one of the oldest synagogues.

At least one person has been killed and more than 20 injured in clashes outside Cairo’s St Mark’s Cathedral following the funerals of four Coptic Christians killed in religious violence.

Police fired tear gas to break up the violence.

Witnesses told local TV stations that the violence started when a mob attacked mourners as they exited the cathedral, pelting them with rocks and petrol bombs. The Christians responded by throwing rocks back, the witnesses said, until police arrived and attempted to quell the unrest.

It was reported that a fire had started in a building adjacent to the Cathedral, but the blaze had since been extinguished.

Pope Tawadros II, the head of the Coptic Christian church, appealed for calm and the preservation of national unity.

Speaking on Sunday evening, he said he was in contact with government officials.

Egypt’s minority of Coptic Christians, who make up about 10% of the population, have accused the government of failing to protect them, following the fall of Hosni Mubarak in 2011.

Clashes between Muslims and Coptic Christians have been seen numerous times since then, but this weekend’s violence was the worst seen in several months.

Police said five deaths – four Copts and one Muslim – occurred on Saturday in Khosous, about 10 miles north of Cairo, after inflammatory symbols were drawn on an Islamic institute, provoking an argument.

The dispute escalated into a gun battle between Christian and Muslim residents, while Christian-owned shops were also attacked.

Violence there flared again on Sunday, with police reporting more sectarian fighting on the streets and clashes between police and youths.

Talaat Abdullah, who was named to the post by President Mohamed Morsi in December, has provoked anger by demanding the arrest of several high-profile political activists.

In a statement on Sunday, Egypt’s Supreme Judiciary Council urged Talaat Abdullah to return to his previous job as a judge.

Last week a court annulled the presidential decree that appointed him, but Talaat Abdullah continued to carry out his duties, including issuing arrest warrants for activists accused of insulting President Mohamed Morsi and Islam.

Pope Tawadros II was confirmed as the new leader of Egypt’s Christian minority at a ceremony at St Mark’s cathedral in the Egyptian capital.

The 60-year-old succeeds Pope Shenouda III, who died in March after four decades on the patriarchal throne.

The enthronement comes at an uncertain time for Egypt’s Christians, following the fall of Hosni Mubarak last year.

Sectarian attacks against Coptic Christians and churches in Egypt have increased since his fall, and many Christians are concerned about the rise of Islamist political forces.

Christians make up 5-10% of Egypt’s majority Sunni Muslim population and form the largest Christian minority in the Middle East.