Spain’s government has stripped Catalonia of its autonomy and taken charge of its government.

The decision came into effect on October 28 after the Catalan parliament voted to declare independence on October 27.

On October 27, PM Mariano Rajoy announced the dissolution of the regional parliament and the removal of Catalonia’s President Carles Puigdemont and called snap local elections.

Demonstrations for and against independence went on into the night.

More are expected today, with a rally “for the unity of Spain and the constitution” to be held in Madrid. 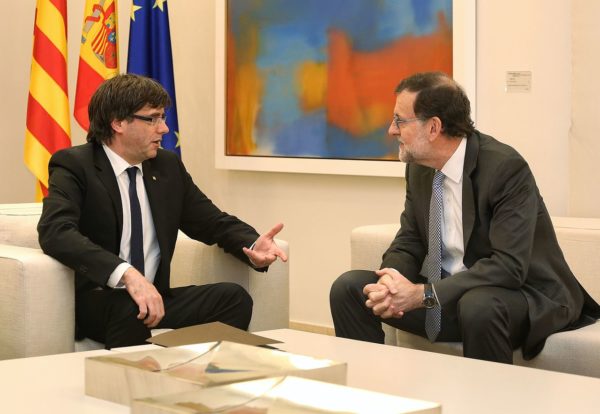 The crisis began on October 1, when Catalan leaders held an independence referendum, defying a ruling by the Constitutional Court which had declared it illegal.

According to the Catalan government, of the 43% of potential voters who took part, 90% were in favor of independence. Others boycotted the vote after the court ruling.

On October 27, the Catalan regional parliament voted to declare independence from Spain.

It did so on October 28 by publishing an official bulletin that dismissed Carles Puigdemont and all government members.

Josep Lluís Trapero Álvarez was already under investigation for sedition, accused of failing to help Spain’s Guardia Civil police tackle thousands of pro-independence protesters in Barcelona during the run-up to the referendum.

Pere Soler i Campins, the Mossos director general, has also been dismissed.

Regional elections are scheduled for December 21.

Carles Puigdemont has urged supporters to “maintain the momentum” in a peaceful manner, but Spanish prosecutors say they will file charges of “rebellion” against him next week.

Separatists say the independence move means they no longer fall under Spanish jurisdiction.

However, Spain’s Constitutional Court is likely to declare it illegal, while the EU, the US, the UK, Germany and France all expressed support for Spanish unity.

Speaking after an emergency cabinet meeting on October 21, PM Mariano Rajoy stopped short of dissolving Catalonia’s parliament but put forward plans for elections in the region.

The measures must now be approved by Spain’s Senate in the next few days.

Catalonia’s leader Carles Puigdemont has ignored pleas from the national government to withdraw the independence bid.

Mariano Rajoy said the government had no choice but to push to impose direct rule, arguing that the Catalan government’s actions were “contrary to the law and seeking confrontation”.

This will be via Article 155 of Spain’s constitution, which allows it to impose direct rule in a crisis on any of the country’s semi-autonomous regions.

Spain’s Senate will vote within the week, PM Mariano Rajoy said at a press conference. He said it was “not our wish, it was not our intention” to trigger the article. 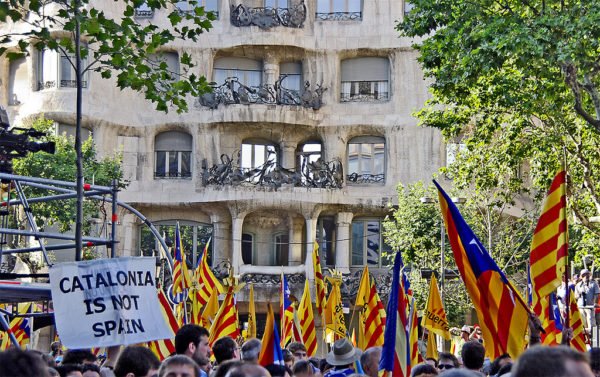 Spanish law dictates that elections must be held within six months of Article 155 being triggered, but the prime minister said it was imperative that the vote be held much sooner.

Catalonia’s regional government held a referendum to ask residents of the region if they wanted to break away from Spain.

Of the 43% of Catalans said to have taken part, 90% voted in favor of independence. However, many anti-independence supporters boycotted the ballot, arguing it was not valid.

Carles Puigdemont and other regional leaders then signed a declaration of independence, but immediately suspended it in order to allow for talks.

He then defied two deadlines set by the national government to clarify Catalonia’s position, and the government announced it would pursue Article 155.

Article 155 of the Spanish constitution allows the national government to impose direct rule over Spain’s semi-autonomous regions in the event of a crisis. It has never before been invoked in democratic Spain.

The article says that if a region’s government “acts in a way that seriously threatens the general interest of Spain”, Madrid can “take necessary measures to oblige it forcibly to comply”.

Catalonia currently enjoys significant autonomy from Spain, including control over its own policing, education and healthcare.

Mariano Rajoy’s conservative Popular Party (PP) holds a majority in the Senate, meaning the proposals are likely to pass.

Catalonia accounts for about a fifth of Spain’s economic output, and supporters of independence say the region contributes too much to the national economy.

Opponents argue that Catalonia is stronger as a part of Spain, and that breaking away would lead to economic disaster for the country as a whole.

Nearly 1,200 companies based in Catalonia have re-registered in other parts of Spain since the referendum, hoping to minimize instability, according to the AFP.

This week, Spain cut its national growth forecast for 2018 from 2.6% to 2.3%, blaming uncertainty over the future of Catalan independence.

Spain is prepared to suspend Catalonia’s autonomy on October 21, as its leader, Carles Puigdemont, threatened to declare independence.

The government said ministers would meet to activate Article 155 of the constitution, allowing it to take over running of the region.

Carles Puigdemont said earlier the Catalan parliament would vote on independence, backed in a disputed referendum on October 1, if Spain “continues repression”.

Some fear the moves could spark unrest.

The government statement said: “The Spanish government will continue with the procedures outlined in Article 155 of the Constitution to restore legality in Catalonia’s self-government.

“It denounces the attitude maintained by those in charge of the Generalitat [Catalan government] to seek, deliberately and systematically, institutional confrontation despite the serious damage that is being caused to the coexistence and the economic structure of Catalonia.

“No-one doubts that the Spanish government will do all it can to restore the constitutional order.”

Article 155 of Spain’s 1978 constitution, which cemented democratic rule after the death of General Franco three years earlier, allows Madrid to impose direct rule in a crisis but it has never been invoked.

Political leaders in Madrid and Barcelona, Catalonia’s capital, have been engaged in a tense stand-off since the disputed referendum, which Catalan leaders say resulted in a “Yes” vote for independence but which Spain’s supreme court regards as illegal.

Spain’s PM Mariano Rajoy set the deadline of 10:00 local time for Carles Puigdemont to offer a definitive answer on the independence question, and called on him to “act sensibly”.

The prime minister said in parliament on October 18: “It’s not that difficult to reply to the question: has Catalonia declared independence? Because if it has, the government is obliged to act in one way, and if it has not, we can talk here.”

This was the second and final deadline, as Madrid says Carles Puigdemont on October 16 failed to clarify whether he had declared independence.

PM Mariano Rajoy is due to attend an EU summit in Brussels on October 19.

On October 21, the government will be expected to draw up a list of specific measures under Article 155 of the constitution, launching the transfer of powers from Catalonia to Madrid.