Ariana Grande has announced her engagement to Dalton Gomez.

The singer posted several photos on her Instagram page, showing a pearl and diamond ring on her left hand.

She wrote: “Forever n then some.”

Ariana Grande, 27, has been dating real estate agent Dalton Gomez, also in his twenties, for just under a year.

In late October, the singer released her sixth album, Positions, which went to the top of the US charts.

The titular lead single also gave her number ones on both sides of the Atlantic.

In February this year, the singer was spotted by the press kissing Dalton Gomez at a restaurant in Los Angeles.

Then in May, they made their first public appearance together as a couple in the lockdown music video to Arian Grande and Justin Bieber’s collaboration, Stuck With U.

The following month, the couple then became Instagram official when she posted a picture of them in each other’s arms on to the social media platform.

Arian Gomez was raised in southern California and has been working in the luxury real estate market for five years, according to his bio on the AKG website. 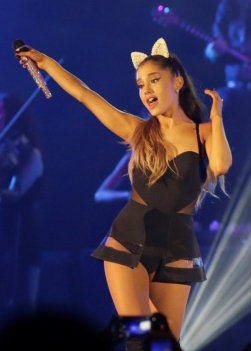