Hundreds of protesters have been detained in Russia as police try to stop nationwide protests in support of jailed activist Alexei Navalny.

Alexei Navalny’s wife, Yulia, said she had been detained at a protest in the capital Moscow, where officers were breaking up the demonstrations.

Thousands of people have already taken part in rallies in Russia’s Far East.

The opposition leader was detained on January 17 after he flew back to Moscow from Berlin, where he had been recovering from a near-fatal nerve agent attack in Russia last August.

On his return, Alexei Navalny was immediately taken into custody and found guilty of violating parole conditions. He says it is a trumped-up case designed to silence him, and called on his supporters to protest.

Several of Navalny’s close aides, including a spokeswoman, have also been detained in the run up to January 23 protests.

Prior to the rallies, Russian authorities had promised a tough crackdown, with police saying any unauthorized demonstrations and provocations would be “immediately suppressed”.

Alexei Navalny Detained After Flying Back to Russia

OVD Info, an independent NGO that monitors rallies, said that more than 800 people had been detained so far in protests across the country.

Thousands are currently attending a protest in Moscow’s central Pushkin Square, where police have erected metal barriers to deter demonstrators.

Russia’s interior ministry said 4,000 had turned up in Moscow, but opposition sources say it may be as high as 15,000.

One witness told Reuters at least 100 people may have been detained there already.

Among them is Lyubov Sobol, a prominent aide of Alexei Navalny who had already been fined for urging Russians to join the protests. Lyubov Sobol tweeted a video of police roughly pulling her away from an interview with reporters.

Yulia Navalnya also said she was being held by police at the same protest, posting an image on her Instagram account with the caption: “Apologies for the poor quality. Very bad light in the police van.”

Several of Alexei Navalny’s key aides had already been taken into police custody in the days leading up to January 23 protests, including his spokeswoman, Kira Yarmysh.

Prominent Navalny activists are also being held in the cities of Krasnodar, Vladivostok and Novosibirsk.

Alexei Navalny has been detained after flying back to Russia five months after he was nearly killed by a nerve agent attack last year.

The 44-year-old Kremlin critic was seen being led away by police at passport control.

Big crowds earlier gathered at Moscow’s Vnukovo airport to greet his flight from Berlin but the plane was rerouted.

Alexei Navalny says the authorities were behind the attempt on his life, an allegation backed up by investigative journalists but denied by the Kremlin.

He tweeted: “I call on Russian authorities to immediately release him.”

Alexei Navalny told his supporters and the media at Moscow’s Sheremetyevo airport just minutes before his detention: “I know that I’m right. I fear nothing.”

His lawyer was not allowed to accompany Alexei Navalny. He kissed his wife Yulia – who had flown with him from Germany – after police officers warned they would use physical force if he disobeyed their orders.

On January 17, extra riot police were deployed and metal barriers erected inside Vnukovo airport, where the plane had been originally scheduled to land.

Russian media reported that a number of activists – including key Navalny ally Lyubov Sobol – were detained.

Alexei Navalny: Traces of Nerve Agent Found on A Bottle in His Hotel Room, Says His Team

Alexei Navalny – who received medical treatment in Germany after his poisoning – urged supporters to meet him off the flight. Thousands of people said they would go or expressed an interest, despite forecasts of extreme cold and the ongoing Covid-19 pandemic.

The activist collapsed on an internal flight in Siberia last August, and it later emerged he had been poisoned with a Novichok nerve agent.

Russian authorities have consistently denied any role in the poisoning, and the Kremlin has rejected Alexei Navalny’s claims that President Vladimir Putin himself ordered it.

In a statement late on January 17, Russia’s penitentiary service said Alexei Navalny “had been wanted since December 29, 2020, for repeated violations of the probation period”.

The penitentiary service added that he would remain in custody until a court decision.

The authorities accuse Alexei Navalny of violating conditions imposed after a conviction for embezzlement, for which he received a suspended sentence. He has always said the case was politically motivated.

Separately, Russian prosecutors have launched a new criminal case against the activist on fraud charges related to transfers of money to various NGOs, including his Anti-Corruption Foundation.

Alexei Navalny has asserted that President Vladimir Putin is doing all he can to stop his opponent from coming back by fabricating new cases against him. 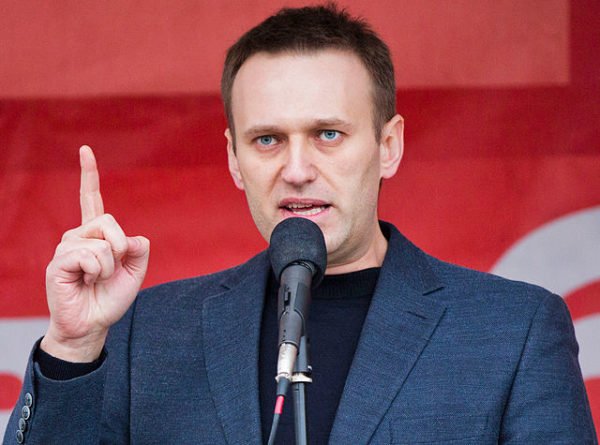 Russian opposition leader Alexei Navalny has been sentenced to 30 days’ administrative arrest for repeatedly violating the law on staging rallies.

Earlier on June 12, Alexei Navalny, 41, was detained at his home in Moscow, ahead of anti-corruption demonstrations in Russia.

Hundreds of people were held during the gatherings across Russia.

A court in Moscow announced its verdict, rejecting demands by Alexei Navalny‘s defense lawyers to drop the case.

Alexei Navalny later confirmed this on his Twitter page.

The opposition leader, who intends to stand for the Russian presidency in 2018, had been due to attend the unauthorized rally in Moscow on June 12.

OVD-Info, an independent NGO, said that 825 people had been detained at the protest in the capital.

Police in Moscow say about 5,000 took part in the demonstration there, Interfax news agency reports.

OVD-Info also said that hundreds of people were held in St Petersburg.

The Russian interior ministry says about 3,500 people attended the protest in the north-western city, and 500 were detained.

Russian opposition leader Alexei Navalny has been arrested at an anti-corruption protest he organized in Moscow.

At least 500 other protesters were detained in Moscow and across Russia.

Most of the marches were illegal, organized without official permission.

TV footages showed demonstrators chanting “Down with [Vladimir] Putin!”, “Russia without Putin!” and “Putin is a thief!”.

Correspondents say the marches appear to be the biggest since anti-government demonstrations in 2011 and 2012.

Alexei Navalny was detained as he arrived to join the rally in central Moscow. Protesters then tried to prevent a police van from taking him away.

In a tweet after his detention, Alexei Navalny urged fellow protesters to continue with the demonstration.

He said: “Guys, I’m fine. No need to fight to get me out. Walk along Tverskaya [Moscow main street]. Our topic of the day is the fight against corruption.”

Alexei Navalny later said police stormed the office of his foundation and detained its staff, who were broadcasting the protests live.

Demonstrations were also held in Saint Petersburg, Vladivostok, Novosibirsk, Tomsk and several other cities, where arrests had also been reported.

In Moscow, protesters filled Pushkin square and some climbed the monument to poet Alexander Pushkin shouting “impeachment”. Turnout was estimated to be between 7,000 and 8,000, according to police.

The police said 500 protesters had been arrested in the capital alone, but a rights group, OVD Info, put that number at least 700.

The Kremlin has not commented on the demonstrations. It had said on Friday that plans for an unauthorized protest in central Moscow were an illegal provocation.

State TV channels did not cover the demonstrations.

Local media reports suggested the authorities pressured students not to attend. In some cities, exams were scheduled on March 26.

Alexei Navalny announced his intention to run for president in 2018 against Vladimir Putin.

However, he is barred from doing so after being found guilty in a case he said was politicized.

Alexei Navalny said on his website that protests were planned in 99 cities, but that in 72 of them authorities did not give permission.