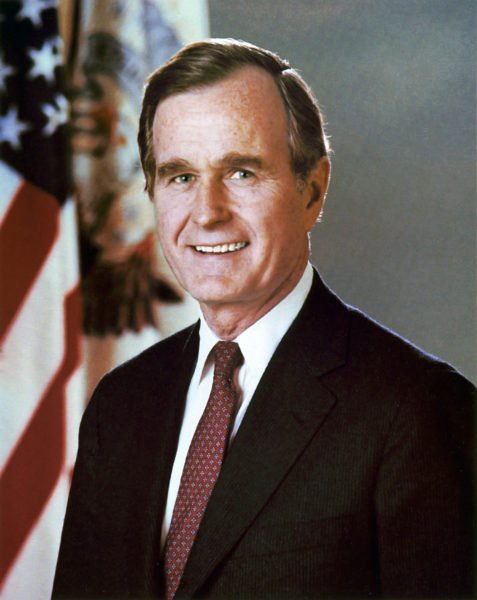 Former President George H.W. Bush has died at the age of 94.

The sad announcement has been made by his son, former President George W. Bush.

George Bush Sr. served as the 41st US president between 1989 and 1993, his term defined by the end of the Cold War and the first Iraq war against Saddam Hussein.

While his health had been failing in recent years, the former president still managed to make public appearances.

In April, he was admitted to hospital with a blood infection but had since been discharged. George Bush Sr. was also being treated for a form of Parkinson’s disease.

His son George Bush Jr., who went on to serve as the 43rd US president, said in a statement: “Jeb, Neil, Marvin, Doro, and I are saddened to announce that after 94 remarkable years, our dear Dad has died.

“[He] was a man of the highest character and the best dad a son or daughter could ask for.”

The US flag has been lowered to half mast at the White House.

George Bush Sr.’s single presidential term in office was dominated by foreign policy – the collapse of communism in Eastern Europe and Iraqi leader Saddam Hussein’s invasion of Kuwait in 1990.

He was instrumental in building the international military coalition that forced Iraq’s Saddam Hussein out of Kuwait.

He became president after serving two terms as vice-president to Ronald Reagan, but he suffered the ignominy of becoming a single-term president – defeated by Bill Clinton in the 1992 election amid a weakening economy.

George H.W. Bush’s famous 1988 campaign promise – “Read my lips. No new taxes” – came back to haunt him when he felt compelled to reverse policy.

He entered politics in 1964 after starting a Texan oil business and becoming a millionaire by the age of 40.

During World War Two, George H.W. Bush was an aviator before being shot down by the Japanese in September 1944 while on a bombing raid.

Following his honorable discharge from the navy in 1945, George H.W. Bush married then 18-year-old Barbara Pierce. Their marriage would last 73 years and they would have six children together.

Former President George H.W. Bush has shaved his head to show support for a boy who has leukaemia.

A Secret Service agent in his security detail has a two-year-old son who is losing his hair as a side-effect of treatment for the cancer. George H.W. Bush has shaved his head to show support for a boy who has leukaemia

George H.W. Bush, 89, lost his greying locks earlier this week at his coastal home in the state of Maine, said a spokesman on Wednesday.

The former president acted after he saw other agents in his detail had shaved their heads.

A spokesman for George H.W. Bush identified the toddler only as Patrick.

The security detail have launched a website to help pay for Patrick’s medical treatment.

Republican George H.W. Bush, whose son is former President George W. Bush, was only himself released from hospital in January, two months after his admission for a bronchitis-related cough.

A computer hacker has stolen personal emails and photographs belonging to former US President George H.W. Bush and his family, according to US media.

One photograph posted on the internet showed the 88-year-old Republican politician in bed in hospital, where he was recently treated for bronchitis.

The stolen emails are reported to include addresses and personal details of several members of the Bush family.

A spokesman for George H.W. Bush confirmed that an investigation was underway.

“We do not comment on matters under criminal investigation,” Jim McGrath told the Houston Chronicle.

The hacker broke into email accounts of several members of the Bush family, news website the Smoking Gun reported.

The hacked emails are reported to include messages expressing serious concern about the health of the former president, including a personal note sent by President Barack Obama through an aide.

George H.W. Bush was discharged from hospital on January 14 after a seven-week stay, during which he was treated for a bronchitis-related cough.

A computer hacker has stolen personal emails and photographs belonging to former US President George H.W. Bush and his family

The purloined photos include pictures of his son, former President George W. Bush.

One shows the younger George Bush posing beside a life-size cardboard cut-out of himself with a moustache drawn on it; others are said to show paintings by him, including self-portraits.

The Smoking Gun said it had been in contact with the hacker, who goes by the alias “Guccifer”.

He said he taken “a lot of stuff” including “interesting mails” about the former president’s time in hospital, the website reported.

George H.W. Bush was the 41st US President, serving one term from 1989-1993. He was defeated by Democrat Bill Clinton when he stood for re-election.

Before becoming president he was Ronald Reagan’s vice-president from 1981-1989. He also served as vice-president, CIA director, US ambassador to China and congressman from Texas.