A deadly fire at a Russian shopping mall has killed at least 64 people in the Siberian coal-mining city of Kemerovo.

According to officials, many of the victims are children, with 10 people still listed as missing.

The fire started on an upper floor of the Winter Cherry complex while many of the victims were at the cinema.

Video posted on social media showed people jumping from windows to escape the flames on March 25.

Russia’s Investigative Committee said in a statement: “According to preliminary information, the roof collapsed in two cinemas.”

The cause of the fire is not yet known and authorities have launched an investigation.

The region’s deputy governor Vladimir Chernov was quoted as saying the fire began in a children’s trampoline room.

He said: “The preliminary suspicion is that a child had a cigarette lighter which ignited foam rubber in this trampoline room, and it erupted like gunpowder.” 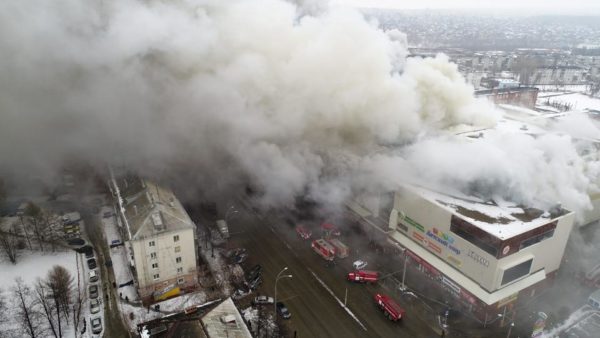 Some 660 emergency personnel were deployed in the rescue effort. Firefighters tackled the blaze for more than 17 hours.

The Winter Cherry complex, which opened in 2013, includes a multiplex cinema, restaurants, a sauna, a bowling alley and a petting zoo. All the animals at the zoo are reported to be dead.

Eleven injured victims are being treated in hospital, suffering from smoke inhalation. The most serious case is an 11-year-old boy whose parents and siblings died in the fire, Health Minister Veronika Skvortsova said.

The fire is believed to have started at around 5PM local time on March 25 in a part of the building that contains the entertainment complex, local media report.

Yevgeny Dedyukhin, deputy head of the Kemerovo region emergency department, said the area of the fire was about 1,500 sq m.

Four people have been detained for questioning, including the head of the company that manages the shopping centre, according to the Investigative Committee. The owner of the shopping mall is among those detained.

Russian officials had initially given a figure of 64 people missing but later clarified that this included victims whose remains had not been identified.

At least nine of the bodies found so far are children.