Arizona Representative Trent Franks has resigned amid an ethics investigation into claims he repeatedly asked female staff to be surrogate mothers.

The announcement came after a congressional panel said it was opening an inquiry into harassment allegations against Republican Trent Franks.

Trent Franks, 60, acknowledged discussing surrogacy with two female aides when he and his wife were facing infertility.

He is the third member of Congress to resign in three days.

One of Trent Franks’ former aides accuses him of offering her $5 million to act as a surrogate mother, repeatedly pressing her to carry his child, the Associated Press reports.

The woman told the AP that another female staff member had also been approached by the congressman about surrogacy.

One of the aides reportedly said Trent Franks retaliated against her after she turned down his alleged surrogacy requests by ignoring her and withholding assignments.

A spokesman for the eight-term congressman – who has a net worth of $33 million – would not comment on whether he had offered aides money to act as surrogates. 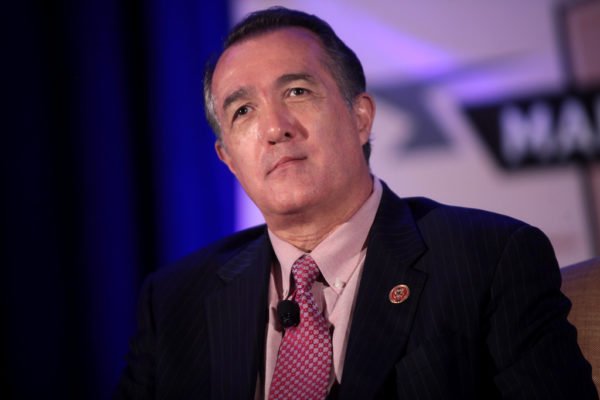 Trent Franks said on December 7 his resignation would take effect next month.

However, on December 8 he said he had decided to quit immediately after his wife was admitted to a Washington hospital “due to an ongoing ailment”.

The Republican acknowledged “my discussion of surrogacy with two previous female subordinates, making each feel uncomfortable.

“I deeply regret that my discussion of this option and process in the workplace caused distress.”

Trent Franks said he and his wife, Josephine, had used a surrogate to carry their two twins.

He stood down as the House of Representatives ethics committee opened an inquiry against him into a matter that constitutes harassment.

Republican Speaker of the House Paul Ryan said he had advised the congressman to stand down.

The ethics committee also announced on December 8 it was investigating Texas Republican Blake Farenthold amid claims of harassment against him by a former member of staff.

It was revealed last week that Blake Farenthold used $84,000 of taxpayer money to settle a harassment lawsuit with his former communications director.

Resignations of two Democratic lawmakers have shaken Washington this week.

Democratic congressman John Conyers announced on December 5 that he will step down after multiple aides accused him of harassment.

Hours before Trent Franks’ announcement, Minnesota Democratic Senator Al Franken said he too was resigning over claims of groping after several Democrats called on him to step down.