At least 335 people have been killed and thousands more injured after a 7.3-magnitude earthquake has shaken the northern border region between Iran and Iraq on November 12.

The majority of those who died were in Iran’s western Kermanshah province. Nearly 4,000 were said to be injured.

Seven people died in Iraq, where people fled into the streets in Baghdad.

Mosques in the capital have been broadcasting prayers through loudspeakers.

One Iranian aid agency said 70,000 people needed shelter after the quake, one of the largest this year.

Most of the victims were in the town of Sarpol-e Zahab, about 10 miles from the border, Iran’s emergency services chief, Pir Hossein Koolivand was quoted as saying on Iranian state TV channel Irinn. 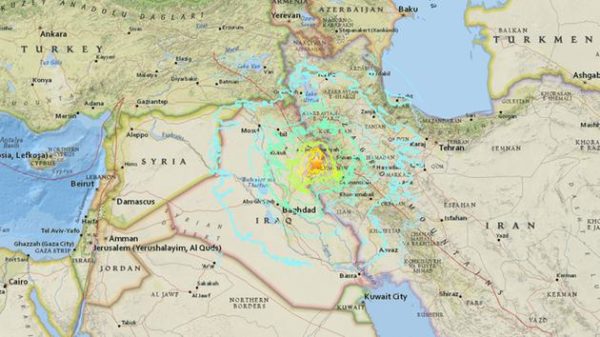 Many homes in the mountainous area are made of mud bricks and are at risk of collapse in a significant earthquake like the one that struck on November 12.

Damage was reported in at least eight villages, the head of Iran’s Red Crescent Organization, Morteza Salim, told the channel.

“Some other villages have suffered power cuts and their telecommunications system has also been disturbed,” he said.

On the Iraqi side, the most extensive damage was in the town of Darbandikhan, 47 miles east of the city of Sulaimaniyah in the Kurdistan Region.

The Iraqi ministry of health said 321 people had been wounded in the Iraqi Kurdistan region.

According to the US Geological Survey (USGS), the quake hit at 21:18 local time, about 19 miles southwest of Halabja, near the northeastern border with Iran.

The strike occurred at a relatively shallow depth of 14.4 miles, and tremors were felt in Turkey, Israel and Kuwait.