Ex- Presidents Barack Obama and George W. Bush have expressed their concerns regarding the current political climate in the US, in comments seen as a veiled rebuke of President Donald Trump’s leadership.

Barack Obama urged Americans to reject the politics of “division” and “fear”, while George W. Bush criticized “bullying and prejudice” in public life.

They were speaking separately and neither mentioned President Trump by name.

Donald Trump, who has been critical of his two predecessors, is yet to comment.

Ex-presidents traditionally shy away from commenting publicly on their successors, and Barack Obama said on leaving office he would extend that courtesy for a time to Donald Trump, as George W. Bush had to him.

Barack Obama has broken his silence since to issue statements on President Trump’s efforts to dismantle ObamaCare, as well as his controversial “Muslim ban” and decision to abandon the Paris climate accord.

The former president added: “What we can’t have is the same old politics of division that we have seen so many times before that dates back centuries.

“Some of the politics we see now, we thought we put that to bed. That’s folks looking 50 years back. It’s the 21st Century, not the 19th Century. Come on!” 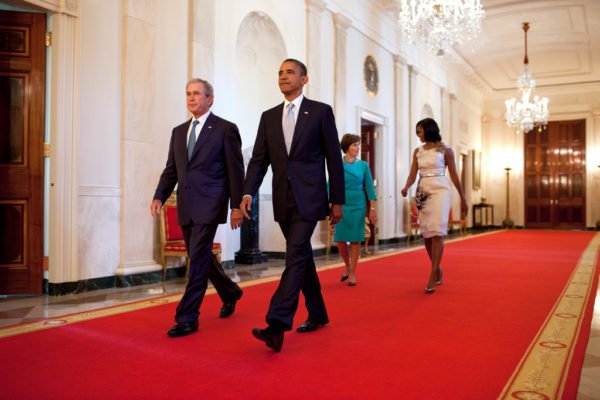 Donald Trump: “Let ObamaCare Die on Its Own”

Barack Obama touched on similar themes at another event later in Richmond, Virginia, saying: “We’ve got folks who are deliberately trying to make folks angry, to demonize people who have different ideas, to get the base all riled up because it provides a short-term tactical advantage.”

“There are some signs that the intensity of support for democracy itself has waned – especially among the young.”

Americans, the former president said, have “seen our discourse degraded by casual cruelty”.

“At times it can seem like the forces pulling us apart are stronger than the forces binding us together.

“We’ve seen nationalism distorted into nativism, forgotten the dynamism that immigration has always brought to America.”

Both ex-presidents have until now largely avoided commenting publicly on President Trump’s policies.

Before his election last year, Donald Trump was highly critical of both Barack Obama and George W. Bush, describing each of them at one time or another as “perhaps the worst president in the history” of the US.

Since his inauguration in January, Donald Trump’s combative style and direct public comments on a number of key issues have caused controversy both among Democrats and Republicans.

The president has regularly blamed the media, which he says do not focus on his achievements and instead choose to concentrate on what he describes as “fake news”.